I had previously posted a case where an attorney decided to drop a high profile case because the defendent apparently could not afford his legal fees. In today's news there apparently is another lawyer that felt his time and money is more important then protecting a client facing murder charges.

The defendent is Andrew Thomas Gallo, a 22 year old driver accused of DUI and running into another car killing Los Angeles Angels pitcher Nick Adenhart along with two other people and seriously injuring a fourth person. According to the paper,

"The Orange County Public Defender got the headline-making case earlier this month after private attorney Randall T. Longwith bowed out when he could not get court funding to hire additional investigators and medical experts."

Again I ask, why is it illegal for physicians to turn away patients facing life and death situations if they cannot pay yet lawyers are allowed to turn away clients facing murder charges apparently because the government will not pay his expected legal fees? Is it any wonder hospitals all over the country are closing their emergency rooms, if not the whole building, because their indigent patient expenses are not being adequately compensated by the government?
Posted by ZMD at 11:13 AM No comments: 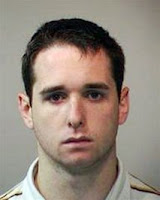 Raymond Clark III, the alleged killer in the murder of Annie Le, the research student at Yale University was seen in court with a new lawyer. His original lawyer, David Dworski, was with him at the time of his arrest. But now, at his arraignment, he has Joseph Lopez and Beth Merkin, public defenders handling his case.

Me thinks somebody did a wallet biopsy and decided this case was not worth his time. Wouldn't it be nice if doctors could abandon their clients (patients) just because they could not afford their care? Where is the universal right to legal care in all this talk about reform? What is more important than fighting in court for somebody's life?
Posted by ZMD at 8:48 AM No comments: