Awake While Under The Knife

This is a surgical patient's worst nightmare. Frankly it's also an anesthesiologist's worst nightmare too. In July 2020, Matthew Caswell underwent a hernia operation at Progress West Hospital in O'Fallon, Missouri. Unfortunately he was awake for at least thirteen minutes during the operation. The anesthesia team had paralyzed him then forgot to turn on a volatile agent to induce amnesia.

Mr. Caswell said he knew something was off when he could feel his skin being cleaned with the cold prepping agent. Expecting that his anesthesia would kick in any moment, next thing he felt was the knife cutting his skin. He was paralyzed and could not inform the anesthesia team that he was awake. His heart rate jumped from 70 to 115. Meanwhile his blood pressure shot up from 113/73 to 158/113. He could feel three trocars inserted through his abdominal wall and his abdomen being insufflated for the operation.

According to the lawsuit, the anesthesia team at this point should have noticed that something was wrong. Yet no further anesthesia was given for thirteen minutes. In the meantime he could hear and feel everything that was going on in the operating room. Mr. Caswell said he was so scared he thought he was having a heart attack.

The anesthesia records later showed a "Significant Event Note." It said that "review of the anesthetic record demonstrates a delay in initiating inhalational anesthetic after induction of anesthesia." Mr. Caswell and his mother were "immediately informed regarding the delay in initiating the inhaled anesthetic agent until after the start of the surgical procedure." It goes on to say that the hospital provided emotional support immediately after the surgery and they would offer psychological counseling for free. His mother took a video of Matthew immediately after the operation and it's clear he has been traumatized by the entire ordeal. 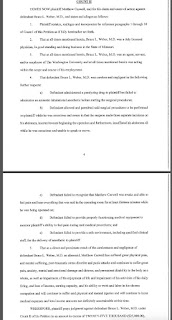 Mr. Caswell is suing Washington University along with the anesthesiologist, Brian Weber, MD, JD, and Kathleen O'Leary, CRNA. (Though the first page of the complaint says Dr. Weber's first name is Brian, the subsequent pages of the complaint call him Bruce. I can't explain the discrepancy.) I can't think of much defense they can mount against this tragedy. Better just write a big fat check right now. Lucky for them the plaintiff is suing each defendent for only $25,000 each.

This is going to be an unfortunate black mark on this young anesthesiologist's career. It's the kind of incident that can easily derail a promising new physician and make him question everything he's learned during training. Though not as traumatized as the patient, Dr. Weber is likely to feel enormous guilt for a very long time.

There are various methods to prevent surgical recall. Some have advocated using a BIS monitor to track a patient's level of consciousness. Other's show that making sure enough inhalational agents in the patient will prevent recall just as well as the BIS. Giving the patient midazolam preoperatively can help ensure amnesia in case not enough gas has been given to the patient.

Perhaps the most important thing the anesthesiologist can do is to always be vigilant. Be constantly aware of what is happening to the patient. Just because an operation is likely to be routine and uneventful is not an excuse to stop monitoring the patient scrupulously. If the anesthesia team in this case had been more attentive to the stresses manifested by Mr. Caswell's tortured surgery, maybe they wouldn't have waited thirteen whole minutes before finally giving him his anesthesia.

The New England Journal of Medicine has published a terrific study on the effectiveness of preventing intraoperative awareness or surgical recall. It is estimated that up to 1% of surgical patients will experience recall of their operation, or 20,000 to 40,000 patients. That is a tremendous number of people who may suffer severe psychological damage and post traumatic stress disorder from a routine operation. There has been no absolute method to prevent recall. The BIS monitor was developed that measures the EEG waves of an anesthetized patient. Through a proprietary algorithm a number between 0 and 100 is determined. A zero indicates a flatline in brain activity while a 100 means a fully awake patient.

The study was conducted as part of a multicenter trial involving over 5,000 patients. Half the patients would have their anesthesia monitored with a BIS monitor. The other half were monitored for awaress with the traditional end tidal anesthetic agent concentration (ETAC) monitor. To prevent surgical recall, the BIS monitor was kept at a reading between 40 and 60. For the ETAC patients, they were kept at 0.7 to 1.3 age adjusted MAC for the inhalational agent. Afterwards, the patients were interviewed at 72 hours and 30 days post surgery for any memory of intraoperative awareness.

To the surprise of the researchers, there were no significant differences in surgical recall between patients monitored with a BIS vs. patients who had an ETAC monitor. In fact, there was a trend for more patients using a BIS to have recall. Of 2,861 patients using a BIS, 7 patients definitely had intraoperative awareness and a total of 19 had definite or probable recall. Of the 2,852 patients who had their ETAC measured intraoperatively, two patients had definite recall while eight had definite or probable recall. Again neither number proved to be significantly different. It's interesting to note that premedicating the patient with a sedative like a benzodiazepine made difference in incidence of recall. Nor did a history of alcohol or drug abuse, ASA classification, or any other criteria looked at by the researchers make a difference.

Surgical recall is one of the most feared complications of surgery for a patient. Questions about it is probably brought up to me during a preop interview more often than almost any other anesthesia subject. The topic is so serious that the American Society of Anesthesiologists has a registry to document all cases of intraoperative awareness in this country.

This study only shows what has long been suspected, that BIS monitoring is not a definitive way to prevent awareness. It probably works better at preventing medical malpractice claims for surgical recall than it is at preventing the recall. You can always tell the patient and his lawyer that you did everything in your power to prevent the awareness, including attaching a BIS monitoring. Thus there really is nothing more that an anesthesiologist can do with current medical technology to prevent this tragic event. Improvements in measuring consciousness in real time is still in the research stages. In the meantime, the best way to prevent awareness is education and studious observation of the patient.
Posted by ZMD at 8:00 AM 3 comments:

A Patient's Need To Know

As I walked into Preop Holding, the nurse comes up to me and whispers, "Your next patient is really nervous about anesthesia."  "Okay," I reply. "Thanks for the warning."  When I see the patient she is wringing her blanket in her hands, shaking slightly, and staring with saucer-like eyes right at me.
"Are you my anesthesiologist?" she asks.
"Yes.  I'm Dr. Z.  Your nurse tells me you are very nervous about anesthesia.  May I ask why?  Did you have a complication from anesthetics in the past?"
"Uh huh.  My previous surgeon told me to tell anesthesiologists that I need extra drugs to keep me asleep. In my last operation I woke up in the middle of the procedure."
"My goodness.  No wonder you're anxious.  What did you do?"
"The surgeon said that I was moving during the operation.  He had to tell the anesthesiologist to give more drugs before I was put back to sleep."
"Do you remember waking up during the operation?" I ask skeptically.
"No."
"Do you recall any conversations in the operating room or feel any pain?"
"No."
"Did you talk to the anesthesiologist afterwards?"
"No."

"I can understand your anxiety," I assured her. "It is okay to be nervous before surgery.  That's perfectly natural." She seemed to calm down a little. "I've never had a patient wake up during an operation.  All our operating rooms are equipped with monitors that track your brain waves.  These machines help us determine if the anesthesia is becoming light so that we can give you more if necessary. Do you feel better?"
"Yes. Thank you doctor."
"You're welcome."
Posted by ZMD at 12:13 AM 2 comments:

I normally don't watch medical dreck on TV. But recently there was an episode of Grey's Anatomy that featured a patient with surgical recall. What brought this to my attention was a patient over the weekend who was extremely anxious about his surgery. After I introduced myself in preop the first thing he asked me was what I am going to do to prevent him from remembering his surgery. I asked him why he was so apprehensive about recall. He said he was watching Grey's Anatomy which showed a patient who remembered his whole surgery but was unable to call for help. Then our preop nurse helpfully chimed in and said she saw it on TV too. Sigh.

I tried to explain to the patient that the reason TV shows like to use surgical recall as a plot line is because it is such a rare occurrence. That's why it is so sensational (in a yellow journalism way) if it does happen. The patient then said he had Googled surgical recall and cited multiple reports. I asked him if he believed everything he read on the internet. He said yes. Uh huh. He also saw an episode on the Discovery Channel that highlighted recall. Again the preop nurse said she saw that too. Grrr. Again I tried to reassure the patient that surgical recall is extremely rare and we use BIS monitors to help decrease the incidence of recall. This finally relaxed the patient. He had read about BIS on the internet and wanted to make sure we use it in our operating rooms.

This goes to show the power of popular entertainment. People actually think they are getting a medical education from watching shows like Grey's Anatomy, House, ER, CSI, etc... The ASA was aware that this episode of G.A. was going to air and wrote a letter to the producers of the show. They were soundly ignored and the show aired anyway. I don't have time to watch shows like this. After going through medical school I can't watch medical shows anymore. I used to like M*A*S*H or St. Elsewhere but now all I see are flaws in their medical presentation and it ruins the whole experience. As an example there was an episode of M*A*S*H where they were in the OR. The surgeon goes over to the wall to look at an X-ray hanging on the light box. If you didn't know better it looked like a normal chest film. But it was very clear the film had the prominent breast shadows of a female patient; I don't think they allowed women in combat during the Korean War.

I'll admit I have not seen this episode of Grey's Anatomy, or any episodes for that matter. I normally try not to criticize something I haven't personally seen or heard. I'll try to catch it on Hulu if I have a chance, after catching up on my American Idol.
Posted by ZMD at 8:27 AM No comments: