The Anesthesiologist's Perspective On The Kristen Diane Parker Tragedy

A few years ago, I wrote about the horrible story of Kristen Diane Parker, the drug addicted surgical tech who stole fentanyl off anethesiologists' carts and exchanged them with dirty syringes of her own. The anesthesiologists she worked with inadvertently infected several patients with her hepatitis C. She was found guilty in 2009 of illegally obtaining controlled substances and will serve 20 years in prison.

Now quite serendipitously I have come across the writings of one of the anesthesiologists that works at that Colorado hospital where this crisis transpired. Her name is Kate O'Reilly, M.D. and she too writes a blog. She describes the years of litigation that followed the incident. The ordeal was worsened by local media that portrayed the doctors at the hospital in a negative light. In the end she settled with the plaintiffs and was never dragged into court but now she is emotionally drained and embittered. She doesn't feel she did anything wrong, or at least negligent, but she and her partners are the scapegoats for something they had nothing to do with.

Keep your chins up Dr. O'Reilly and all the anesthesiologists at Rose Medical Center. This too shall pass.
Posted by ZMD at 5:21 PM No comments: 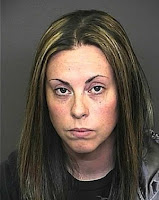 In a follow up to a previous entry, Kristen Diane Parker, the Colorado surgical tech who infected scores of patients with hepatitis C, has pleaded guilty to five counts of tampering and five counts of illegally obtaining a controlled substance. She will serve a 20 year prison term for her actions. She had faced a life sentence if she had not accepted the plea bargain.

Apparently some of the victims are not pleased with the deal:

"Hollynd Hoskins, an attorney representing nine Rose Medical Center patients who have tested positive for hepatitis C, said her clients were not happy with the plea deal and are considering civil action against the hospital."

I guess they are going where the money is.