CPR. Are We Too Quick To Concede Failure?

How many times have we all run to the ICU or the ward after the hospital's overhead speakers scream "Code Blue!" Once there, as we fight through the throngs of people gathered around the patient, we start calling out the ACLS protocol for cardiopulmonary resuscitation all the time wondering how successful it will be this time.

Now a study in the journal Lancet claims that CPR is more successful than we think, if we try a little bit harder. The authors of the study say that prolonging CPR will increase the survival rate of patients who have a cardiac arrest. Hospitals with the longest average CPR efforts were 12% more likely to achieve spontaneous recovery and patient discharge compared to hospitals with the shortest CPR attempts. The study is based on data from 64,339 cardiac arrest patients from 435 U.S. hospitals. The difference between the longest and shortest mean resuscitation times was only nine minutes (25 vs. 16 minutes).

Physicians stopped CPR in only ten minutes in 16% of the cases while the majority, 77%, concluded efforts within thirty minutes. Overall 49% of arrest patients were able to be revived and 8% needed at least 30 minutes to do so. Going against common assumptions, 81% of patients suffered no major neurologic deficits if revived within 15 minutes of initiation of CPR vs. 80% with intact neurologic functions at 15 to 30 minutes and 78% who were functionally intact after 30 minutes of CPR.

This study makes a pretty compelling argument for going the extra mile and continue CPR for just a few minutes longer. You never know if that next chest compression or that last bolus of epinephrine will bring the patient back. And there's the added benefit that the much feared vegetative patient after prolonged CPR shouldn't be of much concern--most patients will regain full brain function once revived.

However, after reading through the information, I couldn't find how the authors break down the patients by different criteria, like age, sex, comorbidity, etc.  Honestly, would you consider performing an extra ten minutes of chest compressions on an octogenarian with multiorgan system failure that hasn't left the hospital in three months but the family wants everything done? By contrast I've seen and done CPR on relatively younger patients that has gone on an hour or longer. The study doesn't say whether the longer CPR survivors were younger or healthier than the shorter CPR patients. So this still leaves a question mark about how long to continue CPR. In the end, it's still up to the judgement of the medical team to decide when is the ideal time to give up the ghost, so to speak and allow one the satisfaction of a dignified passing, not having their ribs cracked, tubes placed into every orifice of the body, while being infused with every stimulant known to mankind.
Posted by ZMD at 1:52 PM No comments:

Email ThisBlogThis!Share to TwitterShare to FacebookShare to Pinterest
Labels: ACLS

Call Us If You Need Us

A report from JAMA says that hyperoxia during cardiac resuscitation can actually be detrimental to the patient's health.  Patients whose blood gases came back with a pO2 of greater than 300 mm Hg were found to have an 80% greater chance of dying compared to patients with normal oxygen tension. 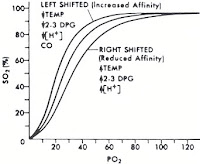 I recently came back from an ACLS recertification course.  During the course they said the new recommendations are that patients should not have their chest compressions interrupted for the ten seconds it takes to intubate and protect the airway.  Also the patients should be bagged at a rate of no more than 8-10 breaths per second as hypocarbia can worsen tissue hypoxia, as demonstrated with the oxyhemoglobin dissociation curve.

Well great.  That means anesthesiologists no longer have to go running to every Code Blue in the hospital to emergently intubate.  The American Heart Association says intubations only delay the resuscitation algorithm.  Intubations usually lead to hypocarbia worsening tissue hypoxia.  And now hyperoxia leads to greater mortality.  Call me after you get the patient's pulse back.
Posted by ZMD at 2:00 PM No comments: