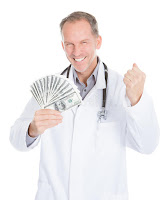 Medscape has released its annual Physician Compensation Report for 2022. The report polled over 13,000 doctors about their salaries and other details about their work. It looks like the pandemic induced reduction in physicians' incomes are over. For the first time in Medscape's survey history, all medical specialties saw increases in compensation during the past year. ENT topped the list with a 13% increase in average annual income.

Since 2015, physician salaries have increased an average of 29%. By comparison, inflation in the U.S. over the last five years has been 14.7%. Anesthesiologists didn't fare as well. In 2015, Medscape said anesthesiologists made an average of $358,000. So In the past seven years, anesthesiologists salaries have flatlined, not even keeping up with inflation. Perhaps that's why our specialty doesn't rank in the top ten anymore of the highest paid physicians. And the ASA wants to keep opening more anesthesia residency spots at the same time.

The top five states with the highest physician incomes are: Kentucky, Tennessee, Alabama, Missouri, and Oregon. If you think you would never live in a rural state even if they have very low cost of living and high salaries, then you're stuck in a bicoastal elitist mentality. Though these states may seem rural, they have very cosmopolitan urban centers too, such as Nashville, Louisville, and St. Louis. Alabama even has nice beaches also. So if you're looking for the biggest bang for your buck, don't overlook this list.

There's a lot more information in Medscape's survey than what I have listed here, including one nice aspect of working in anesthesiology that tops all other specialties. Check it out.