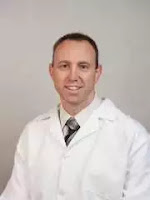 UCLA anesthesiologist Christopher B. Rake, MD was escorted out of UCLA Medical Center for refusing to take the Covid vaccine. He filmed himself as he was led out of the building.  As he's leaving, he says to the camera, "This is what happens when you stand up for freedom. This is the price you have to pay sometimes. I'm willing to lose everything, my job, paycheck, freedom, even my life. United we stand, divided we fall." The hospital has placed him on unpaid administrative leave, which is just fancy words for getting fired.

Dr. Rake, NOT an ASA member, graduated from Tufts University School of Medicine in 2004 and completed his residency at UCLA. He has been a prominent spokesman for the anti-vax movement in Southern California. He was filmed in Santa Monica at a rally against the vaccine and talking about Q-Anon. He is so adamant against the vaccine mandate that he hasn't even tried to use a medical or religious exemption.

One one hand, he can be admired for standing up so strongly for his principles. He's willing to lose his reputation and livelihood for something he truly believes in. For most of us, it is far easier to just give in to these mandates and take the shot. It's not that different from the flu vaccine that all healthcare workers in LA County are required to get each year. Get the shot or get fired.

However, I wonder what Dr. Rake thinks about all the other rules we willingly follow to improve our lives and those of others. What about childhood vaccinations for measles, mumps, rubella, tetanus, etc.? How about seatbelt laws? Rules against driving while under the influence? Airport security inspections? All these things are personally uncomfortable or restrictive. Yet we tolerate them because we know they help the greater good.

Good luck to Dr. Rake finding another anesthesia job. He will probably have to move out of California since we have some of the strictest rules against anti-vaxxers in the country. However, hospitals all over the country are requiring their healthcare workers to get vaccinated so it won't be an easy job search.