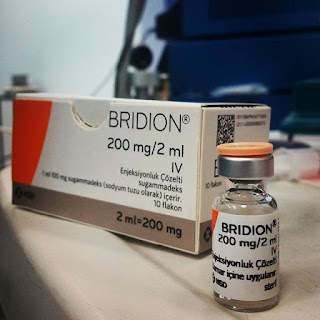 I've been a lifelong fan of cisatracurium (Nimbex). It has been my neuromuscular blocker of choice ever since residency. Why do I love it so much? Let me count the ways.

I've found that Nimbex is very predictable in its metabolism. I've been burned badly before when I used another agent like rocuronium on a patient with renal insufficiency and the patient had incomplete reversal at the end of the case that necessitated reintubation. Not good for the patient or your reputation as an anesthesiologist.

Thanks to its Hoffman elimination, I don't have to worry about a patient's kidney or liver function. The drug just metabolizes at a very steady and predictable manner. This is particularly important when a patient may have an unknown issue with their renal or hepatic functions and suddenly you're wondering why the patient isn't waking up. Nimbex is also very easy to reverse. Neostigmine easily takes care of the drug and the patient emerges quickly.

Sure you can't use Nimbex for rapid sequence induction but that's okay. Most cases don't require RSI anyway. Due to Nimbex's property of predictable reversal, I've stuck with it long after many of my colleagues switched to roc. But now that's all changed thanks to the miracle of sugammadex.

Sugammadex (Bridion) is a drug invented specifically to reverse the paralysis induced by rocuronium. But it also works with other aminosteroid compounds like vecuronium. I feel it has revolutionized NMB reversal the way propofol transformed the induction of anesthesia.

First of all, Bridion works very fast. I'm always amazed by how quickly a patient starts moving after it is given, even if there is still a fair amount of inhalational agents on board.

Rocuronium no longer needs to be carefully titrated in order for it to be reversible at the end of the case. This is especially relevant in procedures that finish rapidly like in ENT. Those cases always present the conundrum of the need for deep paralysis followed by a quick emergence. There's no greater predicament for the anesthesiologist than staring down at a patient with zero muscle twitches and an impatient surgeon wanting to get his next case started ASAP. Prior to sugammadex there was no way to reverse a deeply paralyzed patient effectively.

One can give roc to anybody with sugammadex. Before, I was always leery of using Bridion in dialysis patients because there was always a small chance that the reversal agent would wear off before the body has cleared the NMB. I have yet to see that happen. It's just as easy to wake up a patient with renal failure as a patient with normal kidney functions.

With all these advantages, rocuronium and sugammadex have become the combo of choice in our department. Nimbex use has practically disappeared. Bridion is in such high demand that our pharmacy is complaining about the high cost of the drug. Whereas one 200 mg vial of sugammadex costs about $100, one vial of neostigmine costs $10, and that can be used with multiple patients. Our sugammadex costs are now disrupting our pharmacy's budget because people are using it so often. In addition, the anesthesiologists frequently use more than one vial per patient as some are now becoming too lazy to titrate their NMBs properly.

Are there costs that are saved because we use so much sugammadex? One has to consider the cost benefit analysis for a weak patient in PACU that requires reintubation. What are the costs of prolonged OR use because the patient took a longer time than anticipated to wake up? What is the cost of the psychological trauma in a patient who is gasping for breath because he is too weak to breathe? Or the patient who is too weak to protect his own airway when extubated too early and she aspirates, requiring hospitalization for pneumonia? All these should be taken into consideration when calculating the cost of using sugammadex.

Are there downsides to sugammadex? I've already mentioned the exorbitant price of the drug. That hopefully will come down in a few years when the drug goes off patent and generics flood the market.

Worse than that though is that I think sugammadex makes anesthesiologists lazy and they lose an essential skill. It's a real art to titrate paralytic agents properly so it can be reversed quickly at the end of a case. It's not something that can be taught in a book since each patient is unique in their ability to metabolize NMBs and every surgical case is different. With sugammadex, it doesn't matter at all. This is particularly detrimental to the anesthesia residents. It is just as easy to wake up a patient with zero twitches as one with four twitches. There is no learning there. Just give more sugammadex! But they didn't learn anything about the art of controlling anesthesia.

This is all part of the long standing trend of making anesthesia ever faster and easier to use. From halothane to desflurane. Pentathol to propofol. Pancuronium to rocuronium. If we're not careful, anesthesia could become too easy to administer. There are plenty of people who would love to get anesthesiologists out of their procedure rooms. From gastroenterologists to cardiologists, having one less physician in the room would be a dream come true. If anybody ever makes reversal agent for propofol, anesthesiologists would soon be unemployed.

Email ThisBlogThis!Share to TwitterShare to FacebookShare to Pinterest
Labels: Anesthesia Emergence, anesthesiology science, What do anesthesiologists do