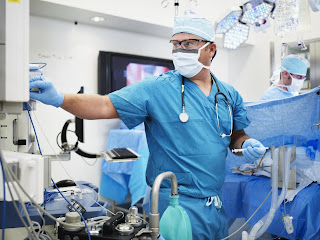 US News & World Reports has released its annual rankings of medical schools in the country. The list is split between medical schools that primarily focus on primary care and schools that are more research oriented. The research oriented schools are no surprise. They comprise the usual suspects of top universities in the country: Harvard, NYU, Duke, Columbia, Stanford.

The survey also lists the top specialty fields at each school. I'm assuming this means the residencies that are located at the schools. It is based "solely on ratings by medical school deans and senior faculty from the list of schools surveyed." In other words it's a popularity contest. They rank several residencies including internal medicine, radiology, surgery, and anesthesiology.

So let's cut to the chase. Which anesthesiology residency did these medical school faculty think is the best in the country? No surprise here, they closely mirror the top research medical schools. The top ten from one to ten are: Johns Hopkins, Harvard, UC San Francisco, Duke, Penn, Michigan, Columbia, Stanford, NYU, and UCLA. These are almost all the same schools as the top research schools in the list.

What about the best surgery programs? You would think that having a great surgery residency is almost a prerequisite for having a great anesthesiology residency since the two professions work so closely together. Once again, the list closely matches the best research schools. They are: Johns Hopkins, Duke, Harvard, Michigan, UCSF, Penn, Stanford, Columbia, UCLA, and Washington University.

Since these rankings are based on their presumed reputation from faculty members, there is an inherent bias towards well known schools like the Ivies and East and West coast schools. Just remember that, like going to college, it's not the name of the school that you graduate from that matters. It's what you do with your education afterwards that will determine your success in this world. If you graduate from virtually any anesthesiology residency you will be considered to have gone into one of the best jobs in medicine.