ASA Gets Sued For Scientific Article 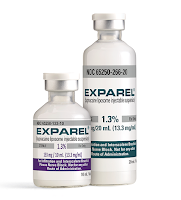 Pacira BioSciences, the maker of Exparel, a liposomal bupivacaine, has sued the American Society of Anesthesiologists and writers in the journal Anesthesiology for economic damages. They are seeking a retraction of the articles. The articles involved in the lawsuit appeared in the February 2021 issue.

According to Pacira, the papers in question disputed their assertion that liposomal bupivacaine is superior to plain bupivacaine. The articles exposed possible biases in research that originally led the company to tout the superiority of Exparel over bupivacaine. Previous papers claimed that Exparel achieved increased analgesia 24 hours after injection. However further study of the data showed that it did not meet the relevant threshold to make this statement.

Other biases leading the FDA to approve Exparel include the company submitting studies comparing the superior action of the drug to placebo. This is an easy thing to prove as it most likely will be better than injecting saline into the body. However when the company conducted research comparing Exparel to other local anesthetics like ropivacaine or nonliposomal bupivacaine, it failed to show increased effectiveness.

Why would a company sue the ASA over studies questioning its drugs? As always, just follow the money. When Exparel was approved by the FDA, sales at the company increased double digits annually, reaching over $400 million in 2019. One dose of Exparel costs $334 compared to only $3 for regular bupivacaine. Yes Exparel costs over 100x more than nonliposomal bupivacaine. To promote this costly drug, the company over the last decade has spent over $25 million to 27,000 physicians for speaking fees and nonaccredited educational events ie/fancy dinners at the local steakhouse and free gifts and rounds of golf.

In the lawsuit, Pacira claims it, "has suffered and will continue to suffer significant pecuniary harm as both existing and potential customers who have seen the disparaging articles, have either canceled contracts with Exparel, declined to purchase Exparel, or are considering removing Exparel from hospital formularies."

I want to congratulate the ASA for publishing some hard hitting articles that will help patient care and improve healthcare economics. However I also remember that there were some MOCA Minute questions in the past that stated liposomal bupivacaine is superior. I hope the writers of MOCA Minute go back and review these questions in light of the new research. ASA, keep up the good work to keep us anesthesiologists well informed and patients safe.