There Is No Perfect Job

When we switched from an independent contractor to an employee job model, a huge weight was lifted off our shoulders. The constant threat of insurance and Medicare reimbursement cuts no longer fell directly on the group. The fluctuating caseloads in the OR during a pandemic made less of an impact on our individual incomes. We thought we had found the formula for the perfect job.

Going in, we weren't just wearing rose-colored glasses. We knew that employed physicians typically made less money than fee for service. This is borne out every year in Medscape's physician compensation survey. But the picture is more complicated than a simple graph.

As independent contractors, we worked as much or as little as we wanted. Some people who wanted a large income could slave away every night and weekend to make a ton of money, far higher than the average anesthesiologist's income in the survey. Others desired more free time and worked less, making much less than the survey average. But those were the choices each individual made for themselves. Now that is no longer an option.

The hospital is paying each of us for a contractually determined number of working hours per day. The ability to leave early because you feel like going outside to absorb some of that bright California sunshine is not permissible. If you finish your OR lineup early, they'll find other cases for you to do until you've fulfilled your work hours for the day. You can't just walk out and refuse to do more work. You're an employee now with expectations of how an employee needs to behave in a workplace. If there really is no other cases in the OR pending, then you can be dismissed early, but that is a rarity.

The flip side is that somebody who wants to work longer hours to make more money also can't do that. After you've filled your quota of hours for the day, they almost push you out the door so they don't have to pay overtime. Therefore your income ceiling is much lower than before. Everybody's income in the department has narrowed closer to parity.

This loss of individual choice was very difficult to adjust to and I've yet to fully come to grips with it myself. When doctors say they don't want to lose their independence, this is what they mean. Suddenly people are telling you when and how you can work. 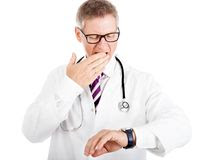 I've also noticed a new psychology at work that I never experienced before when I was working for myself. I was often amused before about how nurses frequently say they only have another so many hours or minutes to go before the end of their shift. I thought to myself how nice it was that there is a definite end to their workday. After we switched over, I started behaving the same way. When they want to add another case to my room late in the afternoon, I no longer get riled up about it. I just look at the clock to see how close to finishing I am and thank my lucky stars I'm not the one who will be stuck doing this five hour spine case the rest of the night.

Those aren't even the biggest changes we've experienced since becoming hospital employees. The more predictable daily hours and generous benefits are wonderful. However there's a price for all this largess; the hospital expects something in return for taking us in and providing these benefits.

Suddenly hiring a large number of anesthesiologists added a huge chunk of money to their payroll expenses. In order for it to work out economically, the hospital decided that they wanted to move to an anesthesia care team model. In other words, we now work with CRNA's. And that, my MD/DO anesthesia friends, has been an eye opener.