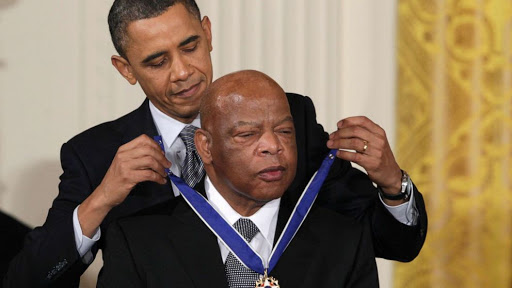 I'm just going to be a little provocative here today. Last week, Democratic Georgia Congressman and Civil Rights icon John Lewis was laid to rest after a brief battle with stage 4 pancreatic cancer. He announced his diagnosis back in December 2019. At the time, he was girding for a fight with the disease, stating, "While I am clear-eyed about the prognosis, doctors have told me that recent medical advances have made this type of cancer treatable in many cases, that treatment options are no longer as debilitating as they once were, and that I have a fighting chance." Unfortunately his fight came to an end July 17, 2020.
Contrast that with two other very famous people who coincidentally were also diagnosed with stage 4 pancreatic cancer recently: Alex Trebek, the game show host, and former Democratic Nevada Senator Harry Reid. Trebek was diagnosed in February 2019 while Reid was diagnosed in May 2018.
Trebek has been very vocal about his treatments. He's been chronicling his chemotherapy with the public routinely, recently announcing his one year anniversary of his diagnosis. He said last September he was not doing so well. He had lost 12 pounds and his CA-19 numbers were still elevated. So he started an experimental immunotherapy treatment on a compassionate use case. Remarkably it worked well. His CA-19 numbers went from 3,500 before the treatments to under 100 now.
Sen. Reid was also doing poorly with his cancer in 2019. Surgery and chemo had failed to halt the progression of the disease. He then got in touch with billionaire physician Patrick Soon-Shiong and got enrolled in the same treatment program as Trebek. Now, two years after his diagnosis, Reid is cancer free.
So what is this miracle drug that is eliminating stage 4 pancreatic cancer? They are using a medication called Abraxane that in combination with other treatments like interleukin-15 and natural killer cells form a "triangle offense" to eliminate metastatic pancreatic, breast, or lung cancers. The regimen is so new it is still undergoing phase 2 trials in the U.S.
This raises the question of whether Rep. Lewis was offered the same treatment protocol. He was the last of the three to be diagnosed with pancreatic cancer yet he is the first to succumb to it. Both Trebek and Reid appeared to respond quickly to Abraxane, within months. Was Lewis given the same opportunity? It's couldn't be about money. I'm sure Rep. Lewis, a congressman for decades, is well off financially. It also couldn't be about VIP's getting different treatments compared to ordinary people as Lewis is as VIP as it gets. Was his cancer stage much worse than the other two such that it was meaningless to offer him this miracle cure? Is it a coincidence that the two survivors are white men while the black man died from his disease?
Due to privacy concerns we will probably never know the answers to these questions. But it seems to add to the confounding statistics that Black men die at a higher rate than white men for the same diseases, even if they are socioeconomically equal.
Posted by ZMD at 10:32 PM