Where Are The Medical Scolds? 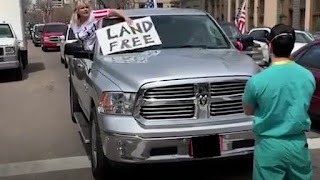 Remember a few weeks ago during this interminable pandemic? People were starting to chaff under the restrictive stay at home orders and social distancing guidelines. Mass demonstrations against these government edicts began to pop up all around the country as people clamored to get back to work and restore their livelihoods.

Instead of supporting their fellow citizens who were on the verge of financial ruin through no fault of their own, a bunch of healthcare workers stood in the streets in their possibly coronavirus infected scrubs to act as human barriers against the protesters. They looked like they were emulating the tank man at the Tiananmen Square uprising in China.

One physician made an indignant plea on YouTube after visiting her local Target store. She was appalled at all the customers who weren't wearing their masks and accused them of being immoral. She freaked out that this was endangering the lives of medical workers by not practicing the proper social distancing and wearing protective coverings.

The press lionized these medical professionals for standing up to the so called ignorance of the selfish population who only wanted to live their own lives free from bureaucratic interference. These were the new social justice warriors who needed to be paid attention to during these difficult quarantined times. 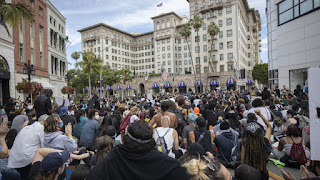 Now flash forward to this past week. There are massive demonstrations throughout the country in the aftermath of the George Floyd death under the knee of a police officer in Minneapolis. Thousands of people are marching shoulder to shoulder through the streets. Some are wearing masks though I suspect it's not for health reasons.

Yet where are the medical scolds to come out and defy these massive crowds? Where is the righteous indignation that all these people dare to endanger themselves and the healthcare workers by deliberately allowing themselves to get exposed to the coronavirus? Where's the outrage at this defiance of the medical establishment?

Could it be that the earlier stand of the physicians against protesters was more about their political views than the health of the population? Now when thousands of marchers are congregating over a police killing, there is nary a concern for virus transmissions. The politicians who before were threatening to arrest people for walking outside with their families are suddenly encouraging the masses to express their impassioned views even if they are blocking the streets and disrupting businesses. There is no mention of extending the lockdowns as the Michigan governor had threatened last month after peaceful protestors surrounded her capital building.

So color me skeptical about this whole pandemic quarantine. Countries like Sweden, Japan, and Taiwan demonstrated that lockdowns are not necessary to combat the coronavirus. This financially catastrophic episode in America appears more and more politically motivated than healthcare driven. The country followed the orders of epidemiologists like Dr. Anthony Fauci, believing that their physician oaths to first do no harm guided their recommendations. After 40 million people suddenly found themselves in the unemployment line and politicians have decided it's acceptable for thousands of people to gather together after all, we wonder if this was the biggest political con job on the American public ever perpetrated.
Posted by ZMD at 12:15 AM