The recent news that the USMLE Step 1 will no longer issue a numerical score has stunned the medical community, especially all the medical students who have yet to take the test. The test takers will now only receive a pass/fail instead of the all important number that's used by residency programs everywhere to screen for acceptable candidates.

Why did the NBME, which administers the test, make this change? Their explanation is that they are trying to de-emphasize the importance of the Step 1 score so the students can concentrate on their clinical clerkships without being distracted by studying for the exam. Apparently some students are so anxious about the Step 1 that their clinical work suffered while they crammed for the test.

However there are some pretty notable flaws to this switch to pass/fail. The most obvious one is that now the emphasis will be on Step 2, since that still retains the numerical score. This comes at the even more crucial senior year when students are trying to juggle residency applications, impress their residency programs with their clinical excellence, and studying for Step 2 with its all too crucial score. I can't imagine that this change will make the students feel any less nervous about their prospects.

Then there is the conundrum residency directors now have in trying to winnow the number of applicants to their programs. Many subspecialty residencies, particularly the highly competitive ones like orthopedics, ENT, dermatology, use the Step 1 score as the first cutoff for choosing which applicants to ask for interviews. There's the absolute minimum score below which a program will not request an interview. Then there is the upper score where students will definitely be asked to come. Everybody else is in a gray zone. Because of this change to pass/fail, all applicants are now effectively in the gray area. Now admission directors will have to use soft evidence of an applicant's excellence, like research conducted or letters of recommendation.

If you've heard something similar to this before, that's because the move away from ranking students based on a number has been prominent in college undergraduate acceptance for years. There is a growing movement among colleges to do away with SAT and ACT exam scores. The University of California recently but just narrowly decided to keep these tests as part of their application requirements.

The reason colleges are removing test scores is because they have a high correlation with a student's socioeconomic status, not necessarily their ability to succeed in college. Students from high income families go to better high schools with more resources like AP classes to help them sail through the SAT. They also have more opportunities to take exam prep courses to give them a leg up on kids who can't afford those after school classes. Now many colleges emphasize a "holistic" approach to accepting high school students to college. They give students extra credit for coming from disadvantaged backgrounds and poor family situations.

However this creates its own complications. Look at the recent lawsuit against Harvard University. It's student admissions office was accused of discriminating against Asian Americans. Many of them had perfect SAT or ACT exam scores yet were denied acceptance to the school. Harvard's holistic approach to finding undergrads seemed to gloss over their high achieving test scores and instead punished them for a far more subjective "personal rating". They were considered less sociable and creative than their non-Asian American applicants.

Will this be the future of residency programs? While a large percentage of medical students are minorities, will the still mostly white residency directors judge the students on their race and perceived advantages in becoming doctors? Seems like this is just another lawsuit waiting to happen as some people are denied entrance to the most competitive programs and questions linger about why somebody got chosen over others since there are really no objective criteria anymore.
Posted by ZMD at 9:03 PM No comments:

Panic At The Costco 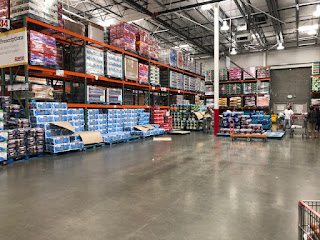 Just how bad are people freaking out over the coronavirus? Here's a picture of the bottled water section at our local Costco. Normally there is a mountain of plastic bottles here. On this day, there were almost none. 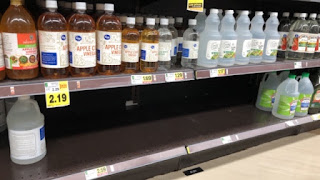 It wasn't just water that people are starting to hoard. In our supermarket, an entire row of vinegar was nearly empty. Usually the giant one gallon jugs of vinegar are left languishing at the bottom of the store shelf as who needs a whole gallon of vinegar at one time. Now they are all gone.

I'd like to think that my neighbors are all well educated and level headed. But the steady bombardment of news about the coronavirus is starting to sow anxiety and trepidation into people who usually don't give into their worst primal fears of survival.

Never mind that so far less than 3,000 people around the world have died from Covid-19. Most of those are in countries with suboptimal healthcare systems and afflicted mainly the elderly and frail. By comparison, the U.S. had over 40 MILLION people with the flu and over 40,000 deaths just from this past flu season alone. Yet we have to spend millions of dollars in public service announcements to get people to take their flu shots.

So as the stock market keeps crashing lower every day (BUYING OPPORTUNITY!) and meetings around the world get cancelled, let's try to keep this virus outbreak in perspective. The most common symptoms for people who are healthy are just mild flu-like illness. This is not the end of the world like some Hollywood science fiction movie. We will all get through this just fine. After all, we still have ten more years to go of living on this earth before we all succumb to climate change.
Posted by ZMD at 10:37 PM No comments:

Is Gastroenterology The Best Medical Field?

Is gastroenterology the best field in medicine? Gastroenterologists enjoy some of the highest incomes among physicians. Some 18 million colonoscopies are done each year in the US, making it the most commonly performed procedure in the country. GI is estimated to bring in almost $3 million in revenue per physician in 2019, double what it made only three years ago. By some calculations, gastroenterology is responsible for $1 TRILLION in medical expenditures each year.

With eye opening numbers like these, it's no wonder that the smart money is starting to pour into gastroenterology. Private equity investors are buying up GI practices to get in on this hot action. The investors are cutting expenses by consolidating office and equipment expenses. They are also able to negotiate better insurance reimbursements by forming larger groups.

GI is relatively easy to make money through buyouts. Many gastroenterologists practice in ambulatory surgery centers that are usually already highly profitable. Purchasing multiple ASC's gives them higher purchasing power and a more efficient backoffice. They are making their businesses even more profitable by bringing inhouse other expenses like pathology and anesthesia services. Why pay another physician a fee when you can pay them a set salary?

So is GI the best field in medicine? From a financial standpoint, it sure looks like a winner. The fees generated from endoscopic procedures would make any general surgeon hopping mad with envy. GI doctors can do dozens of procedures per day in each ASC, generating tens of thousands of dollars in revenue. Surgeons by comparison may only do two or three operations on a good day. As endoscopy gets more advanced, GI doctors are also slowly encroaching on the general surgeons' bread and butter of treating bowel diseases, with the advantage of not making any painful incisions. It looks like GI is ready to take over the medical world. The smartest people in the financial world certainly believe that.
Posted by ZMD at 11:49 AM No comments:

"The Gig's Up". San Diego Anesthesiologist Caught Literally With His Pants Down.

So it's extremely disheartening to find an anesthesiologist in the news due to his substance abuse. Bradley Glenn Hay, MD, an anesthesiologist at the UC San Diego hospital system is being sued for causing patient harm while being under the influence of drugs. In his deposition, which you can read here, Dr. Hay states that he has been addicted almost throughout his residency and professional career. He started out as a heavy drinker in college, drinking a twelve pack of beer three to five times per week. He then moved on to heavy liquor like vodka and tequila. He would go to class or on rounds either drunk or with a hangover. He had been involved in two traffic accidents from DUI. Both times he underwent diversion treatments without much success.

Once he started anesthesia residency at UCSD, he started abusing narcotics. His drug of choice was usually fentanyl. He would check out far more narcotics than most anesthesiologists would use for a case. He would then give himself most if not all the drugs, causing his patients to wake up from surgery with extreme pain. Frequently he would "waste" leftover narcotics in a syringe with a witness when he had actually replaced the syringe with saline, giving himself the drugs he needed for himself. He would even talk his CRNA into falsifying the anesthesia records to make it look like they gave all the narcotics that were checked out.

Then in January 2017, he went to the staff restroom and shot up with some sufentanil, a narcotic far more potent than fentanyl. He almost immediately collapsed. The staff found him lying face down in a pool of vomit, with his pants down by his ankles. When he was revived, he saw all the staff standing around him and realized what happened. "Well I'm caught. The gig's up," he confessed.

He and the hospital are now being sued by former patients for causing bodily harm. Two lawsuits have claimed that while Dr. Hay was under the influence, his patients had received inadequate amounts of anesthesia. They claim to suffer awareness of their surgeries while experience excruciating pain but were too weak to let their predicaments be known. UCSD is being sued for essentially covering up Dr. Hay's addiction from his patients, nearly 800 over a two year period.

This is just a horrible tragedy all around. Hundreds of patients at UCSD may have suffered unbelievable horror movie scenarios while having surgery. The surgeons involved may have lost the faith of their patients. The hospital will spend millions of dollars in legal fees and fines for allowing this anesthesiologist to practice in their facilities. And Dr. Hay may never work as an anesthesiologist again. He has already lost his California medical license and his ABA board certification. I hope he finally gets the successful drug treatment he should have received prior to his overdose.
Posted by ZMD at 11:21 PM No comments: