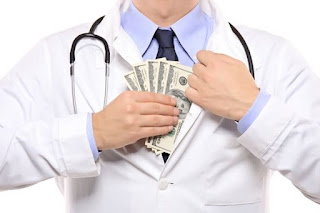 During this election year, there is a lot of debate about reining in the cost of American healthcare and expanding access. The most famous is Medicare For All advocated by Democratic candidates Sen. Bernie Sanders and Elizabeth Warren. Projections for the cost of implementing Medicare For All run as high as $32 TRILLION.

Who is to blame for the outrageous amounts of money that the healthcare industry is sucking from the national economy every year? Many people blame the greedy pharmaceutical companies and their six figure drug treatments. Others blame the scheming lawyers who file nuisance medical malpractice lawsuits that drive up the cost of doing business in medicine. Now two economists from Princeton University have said point blank that it is rapacious physicians who are sucking the system dry.

Princeton economists Anne Case and Angus Deaton presented at the American Economic Association meeting in San Diego recently. They pointed out that the U.S. spends one trillion dollars more for healthcare than the second most expensive system, Switzerland's. That one trillion dollars works out to about $8,000 per person in the U.S. They label this a poll tax on every person in the country.

Despite this added cost, they claim that the American system is not improving the lives of its citizens. They point to decreasing life expectancy and increased mortality from drug and alcohol abuse. But they had especially scathing words for doctors.

According to Mr. Deaton at the conference, "We have half as many physicians per head as most European countries, yet they get paid two times as much, on average. Physicians are a giant rent-seeking conspiracy that's taking money away from all of us, and yet everybody loves physicians. You can't touch them." They point out that of the top one percent of income earners in the U.S., sixteen percent are physicians.

Ouch. I sure would hate to be their doctors knowing that they think they are being ripped off by their physicians. First of all, as economists, they must surely understand the most basic laws of supply and demand. If the U.S. has half as many doctors per capita as Europe, doesn't it make sense that we get paid more here? If there were twice as many doctors practicing as there are now, I'm pretty sure physician income would drop just from normal economic competition. But guess who controls the training of doctors here? It's the U.S. government who determines how many residency spots they are willing to pay for. Simple economics.

Then there is the issue of how much physicians really cost in the overall scheme of medical spending in the U.S. Some estimate that doctors are less than nine percent of the total healthcare spending here. That is less than Germany (15 percent), Australia (11.6 percent) and France (11 percent). Are we really going to halve physicians' incomes which would have a miniscule affect on the entire healthcare spending morass but lead to massive physician dissatisfaction probably cause many to quit the profession?

It just goes to show that these ivory tower eggheads do not really live in the real world. They have their job security and well funded expensive health insurance which are out of reach of many working class people. These are the same people that advised the government on developing a healthcare system where they thought they can keep their doctors if they like them. What a bunch of hooey these people are peddling.
Posted by ZMD at 6:00 AM