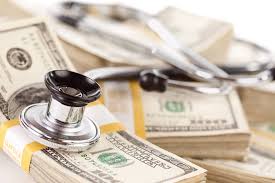 California often foretells social trends that later spread throughout the rest of the country. Gay marriage and legal medical marijuana use are two quick examples. There's another trend that may soon sweep the country to the detriment of anesthesiologists everywhere. And that is the inexorable passage of laws to prevent patients from receiving so called surprise medical bills after receiving medical treatments.

This happens when a patient receives care at a hospital which is contracted with an insurance company, and thus in the company's insurance network, but gets treatment from physicians who may not be in the same network. This most commonly occurs with independent contractors like anesthesiologists or radiologists. So a few weeks after the treatment is completed, the patient thinks the insurance company has already paid the bills when, surprise!, another medical bill comes from physicians the patient may not even remember working with. Anger ensues. Phone calls are made. Letters to Congress are written. Thus we get laws like California's AB 72 and the proposed HR 1384, the Medicare For All Act of 2019.

To understand what a nightmare AB 72 has become for anesthesiologists here in the Golden State, read this excruciating letter from an anonymous physician reporting to the California Society of Anesthesiologists. The law gives all the advantage and leverage to the insurance companies. I've read other incidents very similar to this letter.

Since out of network anesthesiologists are no longer allowed to bill patients the difference between what the insurance company will reimburse and what the physician feels his work is worth, the insurance company can dictate how much money they are willing to pay. They know that according to AB 72, they only need to pay 125% of Medicare's rate for out of network services. They have no reason to negotiate with anesthesia groups for contracts that pay more.

So it's clear that many anesthesiologists are at a huge disadvantage when it comes to negotiating with insurance companies. We already receive less from Medicare than other medical specialties. Then AB 72 allows insurance companies to demand anesthesia contracts that are well below current market rates since they know they have us over a barrel. They will try to get the contracts down to as close to Medicare rates as possible plus 25%. Anesthesia groups who refuse to lowball the contract negotiations get their contracts cancelled and have to accept whatever the insurance companies offer.

Anesthesiologists have no leverage against these leviathan insurance companies. Most are small private groups that just want to go to work every day and provide safe anesthesia care for their patients. They don't have armies of lawyers and accountants to bring to the negotiating table. Pleading for public sympathy usually falls on deaf ears. The ASA's threat that these surprise medical bill laws will cause a decrease in availability of services rings false. Doctors are not going to quit their practices because they're getting paid less. The public already thinks doctors are overpaid anyway, especially anesthesiologists.

There are only a few solutions to this issue. One is to overturn these laws. That isn't likely to happen since the public seems happy with not having to pay their medical bills. The second resolution is to increase Medicare reimbursement for anesthesiologists. If we can get anesthesia Medicare payments to parity with other doctors, most anesthesiologist would be satisfied with that and call it a day. Again that is unlikely as Medicare is already billions of dollars in debt and just a few short years from bankruptcy.

As this presidential election heads towards a referendum on the feasibility of Medicare For All, anesthesiologists can only stand on the sidelines and ponder what living under the 33% problem will be like for their livelihoods. They may realize that they can't live as they have before. The Golden Age of anesthesiology may be passing right before our very eyes as we face lower reimbursements for our services and price competition from below from other anesthesia providers.
Posted by ZMD at 6:00 AM

Email ThisBlogThis!Share to TwitterShare to FacebookShare to Pinterest
Labels: anesthesia stress, ASA News, Medical Economics, no money for you