Anesthesia SimSTAT. How The ASA Is Making Board Recertification As Painless As Possible

Yes I've ranted about the American Board of Anesthesiologists' Maintenance of Certification in Anesthesiology (MOCA) for quite some time. First of all, the doctors who really need to continue lifelong learning to maintain their medical knowledge are grandfathered out of MOCA's requirements. They get to keep their board certification for the rest of their lives without reading a single page of books or studying for any exams. Then there is the question of whether physicians who have to recertify through MOCA are really any more qualified than those who don't. I don't think you'll find many older anesthesiologists who think they are not as smart as their younger colleagues or more dangerous to their patients. 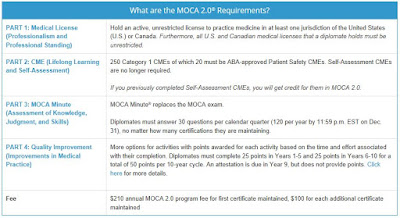 Since MOCA is here to stay, at least it's nice to see that the ABA has been receptive to the loud complaints about the complexity of keeping up with its onerous requirements. One of the most significant changes it made to maintain certification was the elimination of a single winner take all, make it or break it exam at the end of the MOCA cycle. This was extremely intimidating as your whole career could be derailed by one bad exam result. Now you just need to take short online quizzes called the MOCA Minute every year for ten years. The scoring system is a bit opaque despite the ABA's explanations on their website. But let's just say they're not in the business of kicking anybody out of their jobs.

The next hurdle the ABA tackled was the simulation requirement for MOCA Part 4. I know colleagues who were scared to death about Part 4. This was perhaps the most time consuming and expensive portion of MOCA. You needed to make a reservation at an ABA approved simulation center, which is usually in a big city academic facility possibly hundreds of miles away. The simulations are expensive, usually at least a couple of thousand dollars. This doesn't even count the time away from work, transportation costs, or hotel stays if you had to travel a long distance. Then just the thought of going through an oral board type exam, but this time in front of other anesthesiologists, was perhaps the worst part of the entire MOCA experience. Though there are other ways to complete Part 4, most of those involved starting research projects and how they would change their practice based on the results. Seriously, who has time to do that when you're in the OR ten hours a day?

Now the ASA has come to the rescue, assuming you're willing to part with some cold hard cash. The ASA has an online simulation called Anesthesia SimStat. For a cool $1125, if you're an ASA member (and I hope all my anesthesiologist readers are), you get to fulfill your Part 4 requirements from the comfort of your living room or office. Any gaffes you make will only be known to yourself. Nobody's judging your inability to think on your feet or make a critical differential diagnosis. It's all done in the privacy of your own place.

Anesthesia SimStat is truly an exam for the next generation. It is anesthesia through the sensibilities of a video game. I have taken all the scenarios and I've come away impressed, though I was never an avid gamer. It is private, relatively cheap, and meets a requirement to keep one's employment. I predict it will be a big boon for the ASA and anesthesiologists alike. Next I will give some insight in how to "win" at Anesthesia SimStat.
Posted by ZMD at 1:19 PM