Who Knew? Plants Are Affected By Anesthesia. 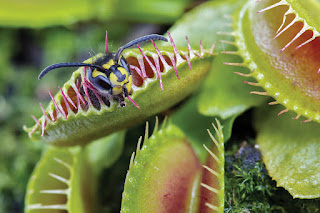 Testing anesthetics have always involved subjecting animals to the different compounds and watching its effects. Either using cute little dogs or helpless tiny rodents, animal experimentation have brought a bad reputation to medical science. Now scientists have discovered that plants may be a substitute test subject for new anesthetics.

In the Annals of Botany, European and Japanese scientists used anesthesia to alter the growth and motion of various plants. Some plants were placed in a sealed chamber with a flask of ether. Others had their roots soaked in lidocaine. What they found was quite amazing.

Venus flytraps no longer clamped shut when their trigger hairs were stimulated. Pea plants maintained their curls and wouldn't grow straight until after the anesthetics were removed. Mimosa plants lost their ability to shut their leaves when physically touched.

Since we still have no clear idea how anesthesia works, this discovery could open up more pathways to understanding how these chemicals affect us without actually subjecting us to experimentation.
Posted by ZMD at 9:33 AM