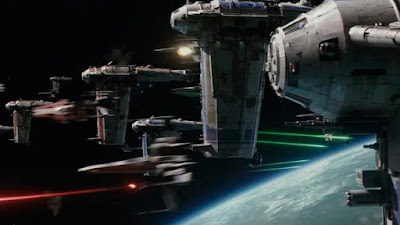 Spoiler alert! Do not read any further if you haven't seen The Last Jedi and don't want to have any surprises revealed. If you don't really give a crap about Star Wars then there's no point in continuing this article either.

After watching The Last Jedi, were you confused by some of the plot turns? Was General Leia's ability to fly through space without any protective gear too much Guardians of the Galaxy for you? How did Luke send an avatar across lightyears of space to battle Kylo Ren? Was it really necessary to see Kylo without a shirt, the first time there was semi nudity in a Star Wars film? (Princess Leia's metal bikini in Return of the Jedi doesn't count.) I was certainly confounded by some of the scenes that I had just witnessed this past weekend at the movie theater. Well now the movie director explains some of his thinking in putting together this latest episode of the space saga.

The LA Times has a conversation with Rian Johnson, the director of the movie. In it, he reveals that there is a keeper of the Force lore at Lucas Films by the name of Pablo Hidalgo. Anytime the director needed one of the characters to stretch the capabilities of the Force, Hidalgo would be consulted. If he agreed that, yes Snoke can make a mental connection between two other people across space-time, then it could be added to the movie. Johnson also explains why Snoke, thought to be the new Emperor of the Dark Side, can be so easily and quickly killed off with barely a fight. And yes he talks about why it was necessary to see Kylo beefcake in the movie.

Check it out. Lots of questions are answered in the article.
Posted by ZMD at 1:37 PM