This past summer I got to witness one of the great natural wonders of the world, a total eclipse of the sun. It was one of those events that I have dreamed about my entire life. Though my view wasn't perfect due to heavy cloud cover that rolled in over our Midwestern location just as the eclipse took place, we got just enough clearing to see the corona. And to me that was a win. I will never forget the phenomenon and I hope my young son, who I brought along with me, will too.

Now there is an unfortunate woman in New York who may being seeing the solar eclipse forever, not just in her mind's eye, but permanently in her vision. An article in JAMA Ophthalmology written by solar retinopathy specialist Avnish Deobhakta (there really is such a sub subspecialty in ophtho?!), details the cautionary tale of this patient who was too eager to watch the eclipse without first getting the proper equipment.

The patient is a young woman in her 20's who decided she wanted to watch the eclipse at the last second. She stared at the blinding sun for about six seconds before she had to turn away. Then she decided to borrow a stranger's regular sunglasses and continued to stare at the partial eclipse for another 15-20 seconds. Within hours she was having visual difficulties. 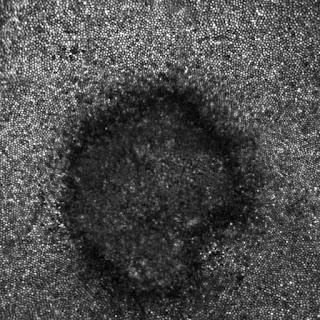 When ophthalmologists examined her eyes with a special instrument that can see individual retinal cells, they found a perfectly shaped burn that corresponded to the partial eclipse she witnessed, including the crescent cutout made by the moon partially obstructing the sun. Six weeks later, she still has a hole in her vision where the retinal cells remain damaged.

Again this shows that one should pay heed to doctors' warnings. Physicians for weeks cautioned people to wear eclipse glasses or they could suffer permanent eye damage. Apparently some people just didn't get the message. 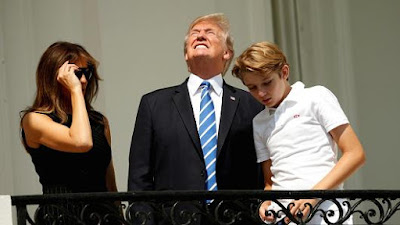