Remembering To Count Our Blessings

At this time of the year, it's easy to forget how lucky we are to live in a developed Western country with all of its luxuries and amenities. We don't think twice about attending yet another office Christmas party or private dinner party and dumping the leftover food into the trash can. We vow we will control ourselves in the new year and make another feeble attempt to lose weight.

Yes it's easy to forget that there are millions, even billions, of people around the world who are not as fortunate as us. The New York Times has a heartbreaking front page story about the horror facing the population of Venezuela. Over there, children by the thousands are dying of malnutrition. 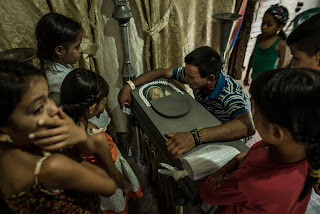 In a country that has one of the largest oil reserves in the world, gross mismanagement and neglect by their government has caused massive food shortages and hyperinflation. Prices are expected to rise over 2,000% next year. Soldiers are stationed outside food stores to prevent looting. Dumpster diving takes on a whole new meaning when a restaurant closes for the night and crowds of people scramble for food that are thrown away.

The government blames economic sanctions by the United States and other Western countries for their suffering. They have stopped releasing health statistics to mask the real trauma facing its citizens. The doctors are overwhelmed by the epidemic of malnutrition. Most hospitals have run out of basics like infant formula that might alleviate the hunger of the babies that are brought to their emergency rooms every day.

So as the holiday festivities continue, just remember that we in the U.S. and other First World countries are the luckiest people to have ever lived in the history of the human population. Though we get bombarded daily by the latest outrage emanating from politicians and celebrities, the situation can always get drastically worse far faster than anyone can imagine. Millions of people in the world are living that nightmare at this very moment.
Posted by ZMD at 8:48 PM