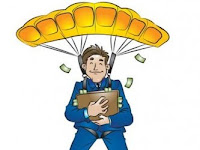 The general public often complains that doctors make too much money. But we know who are actually raking in the dough in medicine. And they usually don't take care of any actual patients. A report in the Wall Street Journal discloses that the chief executive of health insurance company Aetna may walk away with $500 million if his company gets bought by pharmacy company CVS.

The money will come in the form of stock options and personal stock holdings. CEO Mark Bertolini will receive $85 million in exit pay for selling the company. If the deal settles for the reported $207 per share, he will also get $230 million in stock options and his Aetna stake would be worth another $190 million.

Think about that for a minute or ten. While doctors are getting vilified for earning a decent living after decades of education and toil, insurance executives are being given nine figure incomes and bonuses for maximizing shareholder profits by denying insurance coverage to patients and reducing reimbursements for physicians. If healthcare reform is to succeed in this country, the insurance company gatekeepers need to be removed so that all those billions of profits will be properly distributed to the patients and their caretakers. It's immoral that insurance companies stand in the way of doctors properly treating their patients while they keep most of the healthcare industry profits.
Posted by ZMD at 10:23 AM