Another Experimental Cocktail To Die For

Here we go again. State prisons all around the country have been having increasing difficulty achieving their public duties to execute convicted felons. Drug companies have made it a policy not to sell their pharmaceuticals for executions because, well, they were not approved by the FDA for that purpose. In the meantime, the court systems have halted executions when they believed the prisoners would suffer any kind of pain during the process. In desperation, prison systems have been experimenting with different cocktails of drugs to carry out their deathly functions.

We saw recently how Florida became the first state to use etomidate as part of their drug cocktail for executions. Propofol has been getting more difficult to attain as drug companies and pharmacies demand that their wares not be sold to the penal system. Now Nevada is trying another novel drug: cisatracurium. The state will be trying a new potion consisting of fentanyl, diazepam, and cisatracurium on Scott Raymond Dozier. Mr. Dozier was convicted of two separate murders. He is schedule to be executed November 14.

Naturally there are all sorts of objections to this, besides the general disagreement with capital punishment. The state's Chief Medical Officer, Dr. John DiMuro was an anesthesiologist. However he resigned a week ago and his replacement is a psychiatrist. Some fear that a psychiatrist would not know how to administer these drugs. The state assured that there would be trained medical personnel at the time of injection.

The ACLU also objects that cisatricurium would paralyze the prisoner but not actually kill him, causing him to die of slow painful asphyxiation. This actually makes some sense. None of the drugs being used would be considered fast acting. With this combination, the prisoner would die from oxygen deprivation, which is very slow. This is unlike the previous drug cocktail of pentathol, succinylcholine, and potassium. Those drugs are all rapid acting and lead to amnesia and cardiac arrest quickly. So if not enough benzos are given, and this can be tricky since many of these prisoners have histories of drug abuse that require larger than normal pharmaceuticals to work properly, the condemned may awaken before the cisatricurium has stopped his breathing long enough for the heart to fail. They would have to administer massive doses to be sure the drugs take effect quickly.

Naturally this debate will continue since they are trying to execute somebody using chemicals that were developed to help life, not end it. If they truly wanted to end Mr. Dozier's life quickly, history has cleverly invented all sorts of contraptions to do just that. However, we Americans are just too squeamish to consider using them as part of our "sophisticated" modern society. 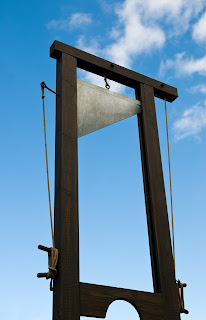 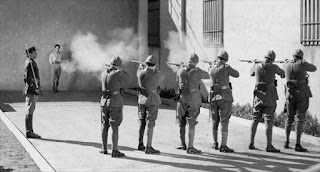