The President And His Cocaine 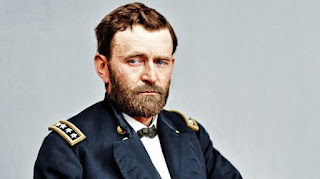 This is why I find history so fascinating. Here is something I didn't know about Ulysses S. Grant, the eighteenth president of the United States. Grant, not known for being a sharp businessman before becoming president, was facing bankruptcy after he retired from public office. Mark Twain offered to write his memoirs so that Grant would not leave his wife a pauper.

However, Grant was facing an oral cancer that was growing more deadly and painful by the day. This was thought to be due to his penchant for cigar smoking and alcoholism. To ease his discomfort, his doctors applied cocaine to his throat to take away the pain. While he was initially able to dictate his autobiography to Twain, he later had to write it out since he was no longer able to speak.

He finished his memoirs just a few days before he finally died. The book turned out to be a best seller and his wife received a royalty check of $200,000. The general fought a good fight all the way to the end.
Posted by ZMD at 11:47 PM

Email ThisBlogThis!Share to TwitterShare to FacebookShare to Pinterest
Labels: History