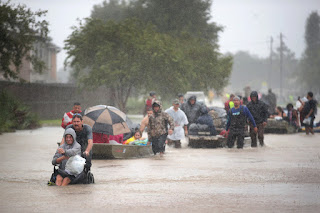 Hurricane Harvey's terrible toll on Houston, seems to have brought out the best in humanity. There are numerous stories of strangers helping strangers escape the horrendous once in a millenium flooding that is ravaging south Texas.

I can't help but contrast the difference between the altruism of Texans and the helplessness of Hurricane Katrina victims in New Orleans. Back in 2005, Katrina slammed into New Orleans and unleashed a similar flooding when the flood dikes gave way, inundating the poorer, lower lying sections of the city. The city opened up the Superdome to house their displaced citizens.

Then the people appeared to get stuck there. Despite what looked like only ankle deep standing water surrounding the stadium, thousands of people were not able to leave and nobody seemed to step forward to help them. I'm glad that the self sufficient Texans are taking matters into their own hands and not waiting for the inevitable slow hand of government to come to their rescue.

Let's not even mention the histrionics that would blare through the airwaves if Los Angeles ever faces a real rainstorm. In this city of precious snowflakes who don't know how to drive properly even when the roads are dry, a forecast for a couple of inches of rain brings out mass hysteria with local news reporters. Dire warnings of dangerous mudslides and flooding are ubiquitous for days prior to even a single drop of rain falling. Then afterwards there are the usual recriminations about how the government wasn't prepared enough to help the people through the horrible tempest.

So God bless all the Texans who are helping each other out during this cataclysm. We're all pulling for you and hope you stay safe.
Posted by ZMD at 11:13 AM