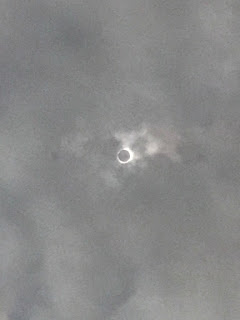 Last week, I had the opportunity to check off an item that was near the top of my bucket list. Unless you were living under a rock, you probably know that the Great American Solar Eclipse occurred over the continental U.S. from coast to coast for the first time in over one hundred years. I've seen several partial solar eclipses in my lifetime, but this seemed like my best chance to see a total solar eclipse. It took place during summer vacation so I could take my son to see it and the maximum totality would happen in the Midwest where I went to school so I had plenty of friends to visit. This was not going to be some solar eclipse in faraway places like the South Pacific or on a remote Asian country.

The problem with going to the Midwest is that the weather there is extremely unpredictable. For the seven days prior to the event, the weather forecast seemed to change almost hourly. Finally on the day of the eclipse, there were some ominous clouds in the western sky in the morning but we hoped for the best. We went to my friend's farm for a viewing party and eagerly chowed down on good down home barbeque while waiting apprehensively with our eclipse glasses.

Unfortunately about one hour before totality, the clouds started rolling in. They weren't particularly uniform, just patchy, but this could mean trouble. With about thirty minutes before the start of totality, it looked like the clouds were not going to cooperate. However there was a small patch of blue sky east of us that everybody could see. We all jumped into our cars and raced towards that clearing. It seemed like everybody else thought the same thing and cars were zooming through the small back country roads heading in the same easterly direction.

As the magic moment approached, we could tell that we were not going to catch up to the clear sky that lay tantalizingly close but still so far away. With about one minute before the start of totality, and the sun just a thin crescent, we finally had to admit defeat and had to find a place to park and hope for the best. I had brought my fancy camera with its extended telephoto lens and solar filter for naught.

Then it happened. The western sky turned very dark. Soon we too were enveloped in the eery twilight that caused the street lamps to turn on and the crickets to chirp their evening songs. The only natural light was way out along the horizon where the sun was not completely covered by the moon. As we kept staring up into the sky, it happened. The clouds just barely thinned out for a few seconds and we saw the eclipse and the corona. It was truly magical. Though it lasted for the briefest of moments, in retrospect I feel like I was mesmerized by it for a long time. My good friend and hostess was able to keep her wits together and took the picture that you see above. That is the only decent eclipse picture we got on our journey despite me lugging that expensive camera equipment halfway across the country.

The next time the clouds parted, the sun was already peeking out from behind the moon. Fifteen minutes later the rain clouds opened up and we were inundated with the typical Midwestern summer thunderstorm. But we had accomplished what we came to do. Grinning stupidly from ear to ear, we high fived each other for a job well done. We didn't get the best view of the eclipse, but we got a view of one which is more than I can say for many other people. As far as pictures go, there are plenty of pictures on the internet of the Great American Solar Eclipse that are far better than anything I could have produced. At least this one picture, and my all too brief experience with my first total solar eclipse,  I will treasure for a lifetime.
Posted by ZMD at 11:14 PM