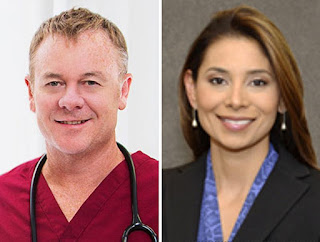 Two anesthesiologists were brutally murdered in Boston last Friday. Dr. Richard Field was a pain medicine specialist. He was an instructor at Harvard Medical School and director of anesthesia for plastic surgery at Brigham and Women's Hospital. Dr. Lina Bolanos was a pediatric anesthesiologist at Massachusetts Eye and Ear and also an instructor at Harvard Medical School. They were engaged to be married.

The police were called to their penthouse apartment in Boston Friday night after Dr. Field texted a friend for help. When the police arrived at the residence, the suspect, Bampumin Teixeira, fired a gun at them. The police shot back and injured him. He is currently being treated at Tufts. The officers found the victims with their hands tied up and throats slit. A note was found that indicated the shooter knew the doctors but the content has not been made public yet.

Mr. Teixeira was recently released from prison in April after spending nine months in jail for two counts of attempted bank robbery. His ex girlfriend said he told her he was born in Guinea-Bissau but was raised by his aunt in Cape Verde. She described him "charming" and a "gentleman". No motive has been announced for this horrible act of violence.

In my opinion, I hope that when Mr. Teixeira has surgery for his gunshot wounds at Tufts, the anesthesiologists there "accidentally" forget to give him any inhalational agents or narcotics. He deserves nothing better. RIP Drs. Field and Bolanos.
Posted by ZMD at 10:31 PM