Shut Up And Go To Sleep 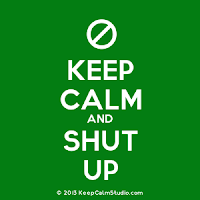 The New York Times has a great piece about the increasing popularity of awake surgery. No, I'm not talking about the nightmarish scenario of being conscious while somebody cuts into your abdomen and you can't move or protest because you've been paralyzed. The article refers to using regional anesthesia to block pain sensations to the extremities while the surgeon operates. These are most likely to be used for hand or arthroscopic surgery.

Most patients who elect to be awake during their operations usually do it out of a sense of curiosity. Others are simply uncomfortable being rendered unconscious. A few prefer the quick recovery of not having had any sedation. They are able to drive home on their own right after their procedure.

However, there are downsides to having the patient alert in the operating room. They may not be able to handle the sight of blood and the sensation of cutting into tissue as well as they might have assumed in preop. But worse for the operating team, the patient may simply just want to talk too much due to their anxiety or curiosity. And guess who will be responsible for conversing with the patient? That's right, the anesthesiologist.

We are the ones at the head of the bed, behind the ether screen. We are the only person in the room that the patient can see continuously the whole time. Says Dr. David M. Dickerson, assistant professor of anesthesia at the University of Chicago, "You might have to make small talk throughout the entire case. They don't teach that in medical school."

That is exactly why patients should be sedated and preferably unconscious during an operation. The patient becomes a major distraction to every staff member working in the room. The surgeon has to watch what he says about the progress of the operation lest the awake patient thinks something is going wrong. He cannot confer with other surgeons or the anesthesiologist about the other patients on the operating schedule without violating HIPAA rules. The anesthesiologist is put in the position of making inane conversation to ease the patient's anxiety. Every alarm and beep on the monitor will trigger another question from the patient. Every instrument that gets dropped by the surgical tech will lead to the patient asking if everything is okay. This constant distraction from the work involved can lead to worse care. There just doesn't seem to be many advantages to keeping patients awake.

Lastly, the newspaper article has extensive quotes from surgeons and patients. Unfortunately there were comparatively few mentions of anesthesiologists. I would think the journalist would want more information from the professionals who make this miracle of awake surgery possible. Were the ASA or the ASRA contacted for their opinions of this hot new trend in medical care? If not, I think our professional societies need more work on their outreach to the media and public.
Posted by ZMD at 11:20 PM