Cage Fight At The VA

There is a cage fight going on at the Veterans Affairs hospital near you. It involves the VA's recent proposal to allow advanced practice nurses (APRN's) to practice to the "full extent of their education, training, and certification without the clinical supervision of physicians, regardless of individual state regulations." The ASA is having none of this.

This is the number one battle right now for the ASA. It's importance to the society and specialty is bigger than Obamacare, bigger than MACRA. Though NP's could potentially supplant physicians in other specialties like internal medicine, anesthesiology is uniquely susceptible to being replaced by nurses in clinical practice.

Medscape has lined up the president of the ASA, Daniel J. Cole, M.D. and the president of the AANA, Juan Quintana, DNP, MHS, CRNA, to go mano a mano to breakdown this controversy. Reading the interviews tells me that the two sides will never come to terms with each other. It's war. It's a fight to the death. Both sides are talking past each other, reciting their respective journal statistics without acknowledging the merits of the other. This will not end until one combatant is down on the mat, bleeding profusely out of every orifice, barely conscious. Then victory will be declared until the next president of the U.S. is elected, fresh lobbyists are hired, and new members of Congress are bribed. Then the fight will be renewed once again.

While the entire article is worth reading, I could barely get past the terrible picture of Dr. Cole in the article. Here's a screenshot. 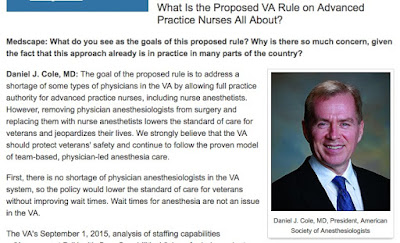 Why is the man purple? He looks like he got some terrible spray tan going on where they loaded the nozzles with blueberry juice instead of tanning pigment. Or maybe he just came back from a blueberry pie eating contest where the contestants aren't allowed to use their hands. Regardless this horrible picture is very distracting and unfortunately lowers the quality of Dr. Cole's arguments. Looks count.

By comparison, Mr. Quintana's skin tone is more appropriate in his picture.

Not to sound too paranoid, but I think there is some conspiracy going on in the graphic design studio at Medscape to make the anesthesiologists' side less credible. Step it up Medscape. There is no place in your supposedly nonpartisan news coverage for this kind of blatant favoritism.
Posted by ZMD at 6:00 AM

Email ThisBlogThis!Share to TwitterShare to FacebookShare to Pinterest
Labels: CRNA