The Most Addictive Drugs In The World 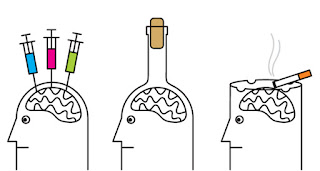 This sounds like a trivia game you can play with your anesthesia friends after a few rounds of mojitos. What are the most addictive drugs in the world? The answer of course is dependent on who is answering the question. But a group of researchers in the U.K. attempted to rank addictive substances based on their ability to cause physical harm, social harm, and dependence. These five are considered to be the worst offenders.

1. Heroin--Using heroin causes the brain to increase its dopamine release, its reward center, up to 200% greater than baseline. It is also extremely dangerous with a very narrow therapeutic window. Its lethal dose is only five times greater than its recreational dose. Over half a million people in the United States used heroin in 2012 and the number is still rising, especially among the millenial generation. Over 156,000 tried heroin for the first time in 2012, far higher than the 90,000 in 2006.

2. Cocaine--The brain's ability to turn off the dopamine reward center is impeded, thus causing dopamine levels to rise to three times greater than normal. Cocaine is considered so addictive that one fifth of people who ever tried it will become dependent. About 20 million people in the world use cocaine creating a market worth $75 billion per year.

3. Nicotine--How addictive is nicotine? Over two-thirds of people who ever tried smoking will become lifelong smokers. Nicotine causes dopamine levels in the brain to increase 25-40%. Over one billion people in the world smoke and by the year 2030, eight million people worldwide will die from smoking related illnesses annually.

4. Barbiturates--Also known as "downers". These drugs were prescribed for treating anxiety but at low doses can lead to euphoria. Though highly addictive, they are not as prevalent anymore due to easy access of other drugs.

5. Alcohol--Over one fifth of people who ever drank alcohol will become alcoholics. Alcohol bumps up the brain's dopamine level from 40-360%. And the more you drink, the higher the dopamine level. That's part of the reason why binge drinking is so popular. Over two billion people in the world drink alcohol and three million will die from alcohol related illnesses.

What, propofol didn't make it on this list? I've never tried four of the five substances that are on this list so I guess I'm good. My personal addiction is sour cream flavored potato chips. Mmm. Sour cream and chives Lay's potato chips. Pardon me while I go binge on a bag.
Posted by ZMD at 8:05 AM