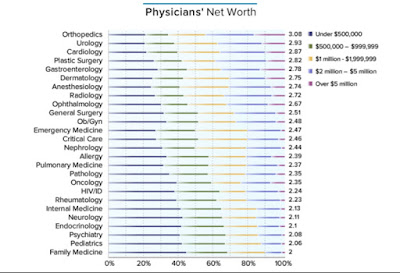 While it is important that one makes sufficient income, what is more pertinent is how much of it you keep. It doesn't make much difference if you make millions of dollars per year but wind up spending it all. Medscape already gave us an exhaustive survey of physician income for 2016. Now it answers the question about how much of that money doctors actually manage to save. Medscape defines net worth as total assets (bank accounts, home equity, investments) minus liabilities (mortgage, car loans, student loans, credit card balances).

Medscape's Net Worth 2016 report in general reveals good news for anesthesiologists. They already stated that anesthesiologists' salaries increased ever so slightly to $360,000 per year. Likewise, our net worth also gained. As compared to 2015, our average net worth went up from $2.68 million to $2.74 million. Granted that's a very small difference in this self reported survey but at least the numbers are heading in the right direction. In addition, almost all the different medical specialties reported an increase in their net worths so the anesthesiology numbers aren't an anomaly.

The older one gets, the higher their net worth reaches. While 55% of physicians over 70 years of age reported net worth of over $2 million, only 9% of those 40-44 years old are that wealthy. I'm proud to report that my net worth is above average for my age group though much of that is due to the overheated California housing market.

What are the major liabilities that physicians face? Not surprisingly, the primary residence mortgage is the greatest drag on net worth. This is followed by car loans, children's college tuition, medical school debt, and car lease payments.

So doctors, heal thyself. Stop complaining about cuts in reimbursements while you're still paying off your college and Porsche loans. Live within your means then you won't be beholden to insurance claims adjusters. You'll be surprised how much more you enjoy being a doctor when that happens.
Posted by ZMD at 6:00 AM