How Much Money Should Anesthesiologists Make?

Medscape recently released its Physician Compensation report for 2016. Anesthesiologists' salaries were about the same as last year, $360,000, showing almost no annual growth. Now $360,000 sounds like a lot of money, and it is. But apparently that's not enough for some people.

As part of the Medscape survey, they also asked physicians how much more money they feel they deserved to be fairly compensated. Surprisingly, the highest paying specialties felt they were the least fairly paid. Orthopedic surgeons, already the physicians with the highest incomes of $443,000 per year, felt they were underpaid by $156,000. On the other hand, anesthesiologists were much more humble in their appreciation of their income, generally wanting "only" $44,000 more to feel they are well paid. 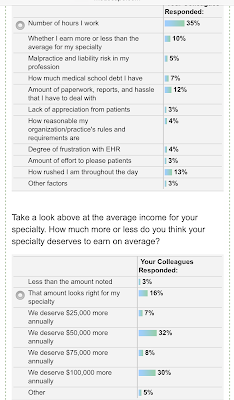 But that doesn't mean everybody feels even that is enough. Medscape did a separate email poll and asked the same question. The results were separated out by different levels of extra income instead of lumping them together as an average. As you can imagine, some people felt they deserved a LOT more money than what they are making.

The email survey asked what factors determined how anesthesiologists decided fair compensation. Not surprisingly, the number of hours they worked had the greatest influence in their satisfaction with their salaries. Other influences included how rushed they felt doing their work and the amount of administrative tasks they have to complete. Don't think professionals like doctors aren't immune from petty envy as ten percent judged their salaries based on how much money their peers make.

That's a lot of wishful thinking. I hope this information doesn't leak out to the general public. When the average income in the United States is a little over $50,000, saying one needs another $100,000 over the average anesthesia salary of $360,000 to be happy sounds very greedy and shallow. Maybe the people who checked off the >$100,000 box are older physicians who still long for the halcyon days where patients followed doctors' orders and physicians could afford to drive exotic cars. Or perhaps the respondents were younger physicians with overwhelming student loans that need to be paid back. The survey doesn't say. But whatever the case, seems like no matter how much money one makes, it will never be enough. Until physicians are satisfied by living within their means, no amount of complaining about poor insurance reimbursements or difficult patients will make them any happier with their lot in life.