How Much Money Do Anesthesiologists Make In 2016? 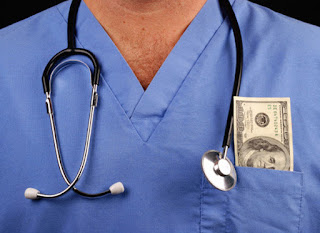 It's that time of year again. Medscape has released its survey of physician salaries for 2016. Full disclosure--I participated in the poll when it was sent out. Over 19,000 physicians filled out the poll and about 6% of the responses were from anesthesiologists. So how much money did anesthesiologists report making this year? Drumroll please.

The annual compensation reported by anesthesiologists was $360,000. This was about even with last year's number of $358,000. This tiny increase came in at the low end among all doctors. Internal Medicine and Rheumatology each registered a 12% increase in salary compared to last year. Only Pulmonary and Allergy/Immunology actually reported drops in salaries. Anesthesiologists came in seventh in a list comparing physician incomes. We trail Orthopedics, Cardiology, Dermatology, Gastroenterology, Radiology, and Urology. Seventh isn't bad, but it seems like others are doing better.

Anesthesiologists who work in the North Central region of the country, the Dakotas down to Kansas and Missouri, made the most money, averaging $413,000. The geographic area with the worst compensation was the Mid-Atlantic region, from the Carolinas up to Pennsylvania. The anesthesiologists there reported incomes of about $342,000.

Are anesthesiologists satisfied with their income? Yes, according to 55% of the respondents. That is 6th on the list of all doctors. Dermatology topped the list with 66% rate of satisfaction. This was followed by Pathology, Emergency Medicine, Psychiatry, and Radiology. Looks like Radiology is still holding its own despite all the doom and gloom about the specialty being outsourced and saturated. Surprisingly Urology was at the bottom of the satisfaction rating despite their high incomes and supposed country club hours.

About 54% of anesthesiologists are satisfied with their careers. This is midpack on the list of all physicians. Once again Dermatology was at the head of the class with 65% reported being satisfied. No wonder Derm is one of the hardest residencies to get.

Bottom line? Anesthesiologists are just treading water while other specialties appear to be surging ahead. Though most anesthesiologists report being satisfied with their careers, I wonder how long that good feeling will last when they see their medical colleagues in the doctor's lounge moving ahead in compensation. There's a lot more to see in the Medscape survey.
Posted by ZMD at 6:00 PM