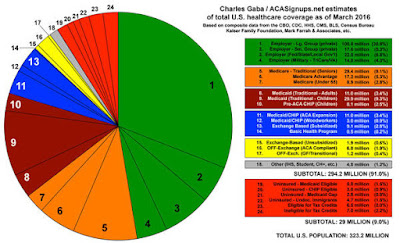 Take a good look at the above chart. It's a breakdown of the different entities who purchase insurance in the United States. It clearly shows that privately purchased insurance now covers just a small portion of the country's population. Health insurance received from private employers are available to about 117 million Americans, or only 36% of the total population. Nearly everybody else in the country receives their insurance from the government.

The federal government is responsible for everybody who gets their insurance through Tricare (military health insurance), Medicare, Medicaid, or Obamacare. The private individual market for health insurance has pretty much disappeared thanks to the Affordable Care Act. The ACA has been responsible for slowly pushing people off their previous insurance plans and into the arms of the feds. This is contrary to what President Obama promised during the debate over passage of the ACA and what I personally had to endure.

Because of the massive presence of the government in the health insurance business already, some people think that a Bernie Sanders proposal for a single payer Medicare for all system may not be that far fetched. According to a study from the City University of New York School of Public Health, the American government in all its entities currently paid around 64.3% of all healthcare spending. That number is set to rise to 67.1% by 2024. The American system will then be very similar to the Canadian single payer program where their government paid for 71% of all healthcare expenditures.

By doing away with the taxpayer funded subsidies granted to private companies for providing health insurance to their employees, hundreds of billions of dollars could be returned to the government to provide insurance for universal coverage. At this point, the Bernie dreamers will realize their vision at last.

So whether you like it or not, universal health coverage is almost at hand. The ACA has effectively squeezed the private insurance market to the point where it is not economically feasible for more and more individuals and companies. Government run health insurance will very shortly be the law of the land without Congressional debates about its merits. Physicians better stop moaning about the low reimbursements provided by the government programs and learn to live within their means.
Posted by ZMD at 11:31 PM