Is anesthesiology boring? That is a question I sometimes get from medical students when they rotate through their anesthesia rotation. Isn't anesthesia a very monotonous way to make a living, injecting the same three syringes of drugs every time, all day, every day? Doesn't it get tedious doing the same thing over and over again for the rest of your life?

I guess if you put it that way, anesthesia does sound boring. But here's the thing. It is only dull if every patient an anesthesiologist encounters is exactly the same. But every human body is unique. Even though we may look like we perform the exact same process with each anesthetic given, in fact every patient gets their own sedation that is custom tailored to their specific needs. A patient with critical aortic valve stenosis undergoing a hernia operation would not get the same anesthetic as someone with severe mitral valve regurgitation having the same procedure.

Our patient population is as varied as any internist's patient list in the hospital. Nobody ever said internal medicine is boring. Or maybe they do. But somehow all the various comorbidities we deal with get overshadowed by the operation itself. Whereas the internist is a hero for ordering an ECG on a patient with new onset rapid atrial fibrillation, anesthesiologists do the same thing except we still need to make sure the patient can make it safely through an emergency small bowel resection. Who's the hero now?

Frankly there also isn't anything wrong with doing the same thing repeatedly until one becomes an expert at the job. Does anybody say Steph Curry is boring to watch because he practices his basketball shots thousands of times per year? Is Roger Federer's job boring because he makes his tennis shots look so effortless? There is no shame in doing something ten thousand times until it looks completely second nature. In any field of medicine, the key to its mastery is repetition. Surgeons become experts at doing appendectomies because they've done it thousands of times during their careers. Internists become lauded for their effective treatments of congestive heart failure because they've faced the same issue hundreds of times a year. So why should anesthesia be considered boring because we have the experience to make our jobs look easy?

So for all the medical students out there who thinks anesthesiology is boring, remember that every patient who enters a hospital is a potential candidate for the operating room. While the patient may have an army of subspecialists taking care of them on the floor, the anesthesiologist who will be overseeing the patient in the OR is doing the work of all those other doctors, but by himself while a surgeon is trying to cut and bleed them to death. Nothing simple or dull about that.
Posted by ZMD at 4:54 PM 1 comment:

Email ThisBlogThis!Share to TwitterShare to FacebookShare to Pinterest
Labels: education, Life in Anesthesia

Los Angeles Is A Terrible Place To Start A Medical Practice 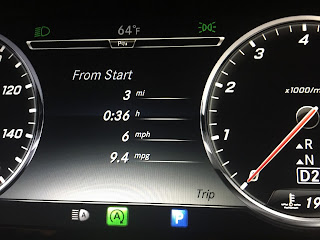 People hear all the time the horrors of commuting in LA. But unless you actually live here, you don't really understand the tediousness and frustration of driving in stop and go traffic for miles at a times. I recently left work at the hospital a little after 5:00 PM. I knew the commute would be a long one but on this particular day I was even more exasperated than usual. As you can see by my odometer, after driving for over half an hour, I had covered a distance of only three miles. Only twenty more miles to get home.

Why don't I live closer to my workplace? Because a doctor's income is barely sufficient to purchase a house big enough to raise a young family on the Westside of LA. Almost all our staff who have small children live just as far away from the hospital as me in order to have access to good public schools and park space. We are experiencing an exodus of young anesthesiologists in our staff who either want to move away to afford a better lifestyle or their spouses refuse to consider the sacrifices they would need to make in order to live here. So unless ninety degree temperatures in the middle of February is your first priority in finding a place to work, LA is a terrible city for doctors to practice, especially if you're just starting out your career.
Posted by ZMD at 11:07 AM 3 comments: