We often denigrate surgeons who hold the view that they are the captain of the ship. They think they are fully in charge of the operating room and everyone else has to do their bidding. We scoff at such antiquated thinking. Don't they realize that surgery is a team approach, with the entire operating room staff responsible for the welfare of the patient?

We sneer at such attitudes, but guess what--when the shit hits the fan, the only person in the operating room who approaches the patient's family is the surgeon. When there is a death in the OR, such as a trauma patient, it's not the entire OR staff who walk the long walk to the family waiting room to disclose the passing of their loved one. It is the surgeon alone. The rest of us merely go about our business cleaning up the operating room to get it ready for the next case. But the anguished cries echoing down the hall are not easily ignored.

Worse are the unexpected complications that can occur in the operating room. Whether it be a pneumothorax from a poorly attempted central line by the anesthesiologist or a sponge inadvertently left inside the patient because the nurses didn't do a proper final count of the equipment, the culprit rarely is the one who has to go to the waiting room to tell the family about the complication. We recently had a patient who died on the OR table. Unfortunately, this happened after the case was finished and the surgeon had already gone out to tell the family that the operation was a success. Guess who had to go back out there to notify the kin of this tragic turn of events? While the rest of the OR personnel kept their heads down safely behind the security doors, naturally it was the surgeon who had to face the music and answer all the angry accusations hurled at him outside in the lobby.

So next time before you accuse a surgeon of being an imperious bastard, just remember that great power comes with great expectations. Unless the anesthesiologist or nurse in the OR are willing to go right out there with the surgeon to confront the family after an unanticipated event, we should give the surgeon some slack if he wants to act like the overlord of the OR. I suspect most of us would rather leave that unpleasant task to the surgeon alone.
Posted by ZMD at 6:00 AM 4 comments: 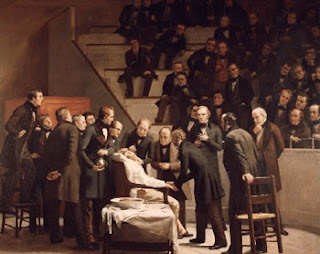 Today marks the 169th anniversary of the first public demonstration of an anesthetic being used for surgery. The seminal event took place on October 16, 1846 at the Massachusetts General Hospital in an operating theater now known as the Ether Dome. That was when a dentist by the name of William Morton used a new substance called ether to anesthetize patient Gilbert Abbott so that his surgeon, John Warren, could remove a tumor from the jaw. After the operation Mr. Abbott declared that he experienced absolutely no pain. Thus the age of anesthesia was born. The operation was nicely chronicled in a New England Journal of Medicine article published that year, voted the most important article ever published in that august journal. For more interesting historical facts about anesthesiology, head on over to the Anesthesia History Association's website.
Posted by ZMD at 6:00 AM No comments:

Medical Liability Monitor released its statistics on the cost of medical malpractice premiums for 2015. It said that premiums have stayed relatively flat for the past year after a slow decline over the previous seven years. The premium changes however aren't spread uniformly. They decreased slightly in the Northeast, Midwest, and West, up 0.9% in the South, and up 9% in Texas, North Carolina, and Georgia. (Whatever happened to the medical malpractice reforms in Texas? Weren't they supposed to deter malpractice claims and decrease insurance costs?)

What astonished me the most was the chart on the difference in prices between the localities with the cheapest insurance premiums and the most expensive. These prices are for $1 million for individual claims and $3 million for any given year. For internists, malpractice insurance only costs $3,375 per year in Minnesota. However if you live in Miami-Dade County, it will set you back $47,707. For general surgeons, the cheapest insurance can be found in Wisconsin, $10,868. However if the surgeon lives in Miami-Dade County, The Doctor's Company will want $190,829 for the same policy. Now if you're an OB/GYN, better move on over to central California, where insurance only costs $16,240. You probably wouldn't want to live in Long Island, New York where it will wring $214,999 from your wallet. I'll repeat that. In Nassau and Suffolk counties on Long Island, an OB/GYN will need to make an after tax income of $215,000 just to buy malpractice insurance.

How can any doctor make enough money just to buy insurance? This doesn't even count all the other insurance that he will need such as health, life, property, etc.  And let's not forget that Uncle Sam wants his fair share from the evil 1% who are obviously preventing the other 99% of the population from a good living because of the "rich".

According to the Medscape Physician Compensation Report for 2015, OB's make $235,000 in the Northeast. General surgeons make $323,000 in the Southeast. Can insurance cost so much that it take away 90% of a doctor's income? How can one make a business case to work there? It's no wonder some physicians elect to go bare and not carry any malpractice insurance at all. It keeps the lawyers from the money grab of frivolous lawsuits while allowing the doctor to maintain a decent lifestyle from all the money they save by not buying insurance. Sounds like a plan.
Posted by ZMD at 1:36 PM No comments:

Email ThisBlogThis!Share to TwitterShare to FacebookShare to Pinterest
Labels: Medical Malpractice, no money for you

What can happen when the anesthesiologist exits the room and leaves the CRNA in charge of the patient.
Posted by ZMD at 11:31 PM 1 comment: