Our Anesthesiologists Make Too Much Money. 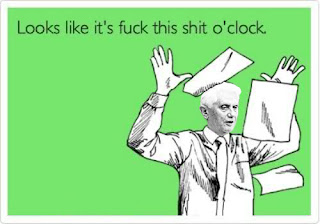 You know the old saying, "You can't be too rich or too thin"? Well, doctors know that one can be way too thin. But apparently some of my colleagues also take issue with the former and feel they are so well compensated that they don't want to work anymore.

This manifests itself almost daily usually around 4:00-5:00 PM. After they finish their lineup of scheduled cases, these anesthesiologists can't get out to the parking lot fast enough. Sometimes they run out the door in such a hurry that they leave all sorts of paper trash, used syringes of drugs, and other refuse lying on the anesthesia machine and cart for others to pick up. But what gets brought to my attention is that there are more cases that need to be done but now no anesthesiologists to do them.

Surgeons will add cases throughout the day to be started after the scheduled cases are completed. The tricky part is that some anesthesiologists don't want to keep working. They saw their schedule from the night before and make plans for afterwork the following day. Nearly every afternoon I get calls from surgeons asking me why there are no anesthesiologists to work in the OR when there are patients to take care of. The nurses are on the clock so they don't care if they work or not.

So now it's time to beg and cajole my colleagues to please stay and take just one more case, even though there may be ten cases on the addon list waiting to get started. But some of these guys quickly turn off their pagers and won't answer their cell phones as they race out of the parking lot in their German luxury cars. They don't care that they are burdening their on call partners and surgical colleagues who now may have to work well into the night to get all the surgeries finished. They have made enough money for the day and no amount will entice them to come back.

This ritual also has a seasonal factor. The beginning of the year is when we have the best work ethic. As fee for service anesthesiologists, we all start January 1 with $0 of income. But usually by midyear, the combination of summer vacations and high compensation lead many of us to start tapering off the work load. By the winter holidays, it is a real chore to find anesthesiologists willing to pick up extra cases. Nobody wants to take on more cases when it just means they'll get bumped up to a higher tax bracket. Unfortunately that is when the hospital is at its busiest.

So if you want to have surgery, try to schedule it near the beginning of the year. Because by Thanksgiving, you could be stuck in the waiting room for hours wondering why your case hasn't gotten started yet. And it's not necessarily because the OR's are too busy, but because there is nobody available to give the anesthesia.
Posted by ZMD at 6:00 AM

Email ThisBlogThis!Share to TwitterShare to FacebookShare to Pinterest
Labels: Life in Anesthesia, Money