One Million Page Views, Thanks To You. 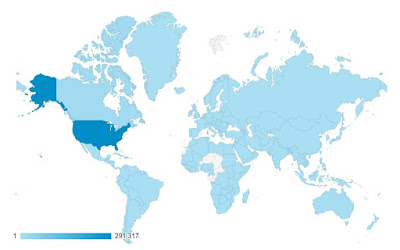 I know that I've been rather lax in my writing recently. I can't blame it all on my recent promotion. Rather, life just has a way of taking over any snippet of free time that I have. But despite my now infrequent posting, readers continue to come back to this blog to learn about the anesthesiology profession and the random musings of this anesthesiologist.

Thanks to all these readers, I recently crossed the ONE MILLION pageview milestone. I know that that is pretty miniscule when compared to the thousands of websites out there that routinely pull in millions of pageviews each month. However, it has been an unexpected and rewarding accomplishment for me. I passed the 500,000 pageview mark back in December 2013, four and a half years after this blog was started. Now a mere one and a half years later, I doubled that number. Thank you to all the readers who made this happen.

As you can see from the map at the top, my readers hail from all over the world. Like the 500K pageview map, the only countries that haven't had a single reader browse my pages are mainly located in sub Sahara Africa, where they have much bigger problems to deal with, central Asia, and North Korea. One of these days, when Kim Jong-un needs his questions about anesthesia answered, one of his minions will surely visit my blog.

The following is a Top Ten list of my most popular posts. There isn't much change from the previous Top Ten list. People are still obsessed about where their bodies are the filthiest. Medical students and anesthesia residents are still inquiring about the anesthesia profession. As for new entrants into the Top Ten, for a few brief weeks the revelation of the shockingly low rates of reimbursements made by Medicare caused this blog to be shared and read thousands of times around the country.

1. The Dirtiest Part Of The Body.

2. Doctors Should Get Kudos For Accepting Medicare Patients.

3. Why I Chose Anesthesiology.

4. The Easy Way To Decide What Kind Of Doctor To Be--Take A Test.

6. Surgery, A Siren That Will Break Your Heart And Crush Your Soul.

7. How To Get Into An Anesthesiology Residency.