ICD-10 is almost upon us. In case you don't know what ICD-10 is, it is a list of over 16,000 medical diagnoses put together by the World Health Organization that classifies every potential human health problem. Originally ICD-10 was supposed to be implemented last year. But after an outcry from thousands of doctors, clinics, and hospitals that claimed they weren't ready yet, the program will finally begin this fall.

Our hospital has been ready to use ICD-10 from its original starting date last year so we are set to go. The hospital's electronic medical record has already converted all previous ICD-9 codes into ICD-10 codes. Sometimes when I'm bored, I just type in random activities into the computer to see what kind of ICD diagnoses have been classified by the WHO. 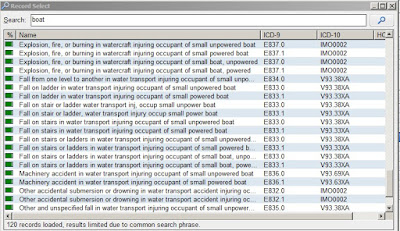 Here, you can see that I typed "boat" into the search bar. What comes up are 120 different items that pertain to a diagnosis involving a boat. This includes falling off a ladder in a boat. Falling down the stairs in a boat. Falling from one level of a boat to another. Getting burned in a fire while on a boat. It is truly astonishing how granular the WHO organizes medical issues.

Other modern day health concerns include the overuse of video games. Here, inflammation of your joints caused by playing Nintendo actually has its own code.

Heavy users of the Playstation also get a category in our EMR's list of medical difficulties.

Xbox users are out of luck. Your inflamed, gnarled hands are not considered significant enough to be categorized by the WHO.

This raises the question of how the WHO decides which health concerns are important enough for the group to assign a specific ICD code. For instance:

Getting struck or bitten by a dolphin carries its own specific ICD number. Don't laugh. You don't have to work at Sea World for it to happen.

However, if you get injured by a whale, the WHO doesn't think that deserves its own diagnosis.

Yet orca injuries do get the blessing of the WHO. Go figure.

And if you work near large aquatic reptiles down in the bayou, you better know whether the one that bit your patient belongs to

a crocodile. The WHO feels these are two separate diagnoses. If you misclassify the injury, your insurance company might deny your payment for including the wrong diagnoses in your billing.

That is just a miniscule amount of medical problems that ICD-10 attempts to organize. Is it a quixotic endeavor to attempt to classify every single medical problem? The bureaucrats at the WHO are certainly giving it their best shot. In the meantime, their work can be used for an entertaining amusement when you are bored out of your mind in the middle of a long tedious case. Makes you realize how lucky you are you haven't fallen down the stairs of a boat while playing your Nintendo DS.
Posted by ZMD at 6:00 AM