What Doctors Eat On Call 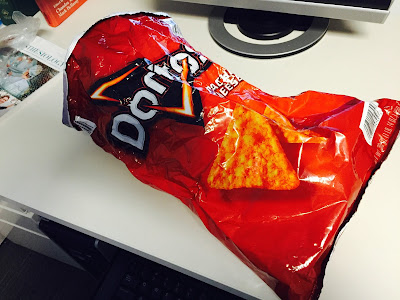 You would think that doctors, with all our lecturing about healthy diets and exercise, would be paragons of nutritional correctness. But we are human just like everybody else. One of the first lessons medical students learn is that when they are on call, they should eat and drink whenever they can because the opportunity may not present itself again until hours later. So it's not uncommon for us to have the most atrocious diet while at work.

I was on call the other day and hadn't had a chance to eat anything, other than a furtive bite of a granola bar I had in my pocket. Finally, by around 9:00 PM, the operating rooms were starting to settle down. I dragged myself to the break room to get some water and what did I see when I opened the door? A bright red half eaten bag of Doritos was sitting on the table. Now anything that is sitting out in the break room is fair game. I looked around the room but it appeared I was all by myself.

I looked into the bag. There wasn't that much left, maybe a couple of servings at most. I told myself I will eat just one chip, not only because Doritos aren't exactly a health food, but because other people may want some too. I reached into the bag and brought out a perfectly triangular and unbroken chip. When I popped that in my mouth, a rush of endorphins rushed through my body. It felt like the most satisfying morsel of food I had ever eaten in my whole entire life. I didn't realize how famished I was until my tongue was coated with that delectable nacho cheese powder.

Well who can stop with just one chip? But now I wanted more. Not just more. I wanted it all. I don't care if other people working that night didn't have a chance to eat the Doritos. That bag was mine, MINE! Since there was still nobody in the break room, I quickly snatched the bag and headed to my call room. Once in the privacy of my room, I greedily reached into the package and grabbed another chip, followed by another and another. Before I knew it, I was tipping the bag upside down over my mouth to get the last crumbs of Doritos at the bottom. Then I was licking my nacho cheese covered fingers hungrily. If I could devour my cheese powder covered fingers for a snack, I think I would have that night.

Then it was over. The Doritos bag was empty. My orange colored fingertips held no more nacho cheese. And I was left suffering a deep sensation of guilt for absconding with a bag of chips from the break room. And these truly are empty calories. I felt no more fulfilled now then when I first started eating the chips. But my pager started beeping and I had to get back to work. Even if they are empty calories, they're calories just the same, enough to get me through another few hours of work.

Besides, nobody will ever know how pathetic I was when confronted with a bag of Doritos. Unless my Doritos breath gives me away. I kept that surgical mask over my face the rest of the night.
Posted by ZMD at 11:05 PM