The Scariest Chart A Doctor Will See 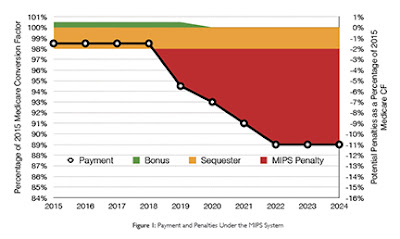 This chart should frighten the bejeezus out of doctors. It comes from the July, 2015 issue of the ASA Newsletter. It's included in an article explaining how the new SGR fix, now known as MACRA, is supposed to work. In a nutshell, the graphic illustrates how the government takeover of American medicine is going to decimate the economic livelihood of physicians.

As you can see, during the first five years of MACRA, Medicare will entice doctors into the program with a tiny little 0.5% bonus payment each year, which doesn't even cover the cost of consumer inflation, let alone healthcare inflation. But then, in 2019, once doctors have become fat and happy with the new system, the hammer will start too fall. Medicare will start paying, or more accurately, penalizing physician reimbursement based on a set of bureaucratically selected criteria on "performance".

These factors encompass an entire bowl of alphabet soup acronyms: PQRS, VBM, MU, CPIA. I won't get into the definition of each one as that would take a lot of time and frankly, I'm not even sure of their exact meanings. You'll just have to read the article for yourself. But the bottom line is that if doctors don't measure up to these new government rules, their paychecks will start to shrink, dramatically. In ten years, which is when MACRA will sunset, physician compensation could be cut a maximum of 9% each year. For typical doctors' incomes, we're talking about $20,000 to $50,000 that will be eliminated based solely on how some faceless government workers decide how well you follow their rules. You'll also notice that this is all based on negative reinforcement. There is no bonus for doing well, only penalties for not performing as well as the feds think you should. As a matter of fact, if every single doctor doesn't do what the government wishes, Medicare may actually save more money. So you can see how if Medicare decides it needs to reduce its budget, it can easily complicate the rules anytime it wants to cut physician payments at its whim. Talk about an abusive codependent relationship.

So the American Medical Association may be crowing about how they finally rid medicine of the hated SGR. But out in the real world, working physician will only likely face more pain for years to come.
Posted by ZMD at 11:57 AM