Because we anesthesiologists are so bad at explaining our purpose in the operating room, our good friends from The Joint Commission have developed this colorful poster of what patients can expect when they go in for a procedure. I guess the ASA could use some education on how to effectively teach patients about anesthesia. Compare the TJC's succinct, graphically intensive poster to the ASA's Lifeline to Modern Medicine website that tries to do the same thing: 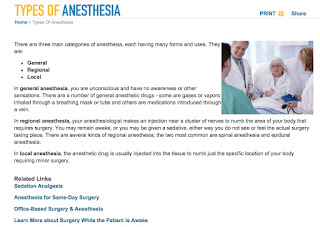 Yeah the ASA should use some of the millions they receive from our annual dues and hire a better graphic artist.
Posted by ZMD at 11:22 PM No comments:

An anesthesiologist in Virginia lost a $500,000 malpractice suit when a patient recorded the conversation inside a GI procedure room. The patient had set his cellphone to record so that he could remember his post colonoscopy instructions. He accidentally left it on when he went in for his study.

What he found was shocking and humiliating. He heard the gastroenterologist, Dr. Soloman Shah, and the anesthesiologist, Dr. Tiffany Ingham. make derogatory comments about his masculinity and anatomy. They snidely remarked about the man's penis, saying a lesion may be syphillis, TB, or even Ebola. The anesthesiologist suggested the patient should "man up" when he was squeamish about getting his IV line started. The anesthesiologist, for no good reason, even lied and wrote on her record that the postop diagnosis included hemorrhoids when in fact the patient did not have the condition.

For these comments, the jury found Dr. Ingham guilty of defamation and awarded the plaintiff $100,000. Then they piled on $200,000 for medical malpractice, even though as far as we know, the anesthetic was fine. And then the jury gave the man another $200,000 for punitive damages. Shockingly, Dr. Shah was let out of the case. This was despite the fact that he too was heard on the audio agreeing with and contributing to the derogatory comments. Either he had a much better malpractice attorney than the anesthesiologist, or he had much worse malpractice insurance.

What's the lesson here? Anesthesiologists should treat their patients as well when they're asleep as when they're awake. In fact, they should take care of their sedated patients even better since they have no way to defend themselves while they are in such a vulnerable position. And if you hear anyone else in the OR making stupid remarks about a sleeping patient, remember that you too can be found liable for being an accessory to defamation.
Posted by ZMD at 10:32 PM No comments: