People Care More About White Teeth Than Their Grandparents 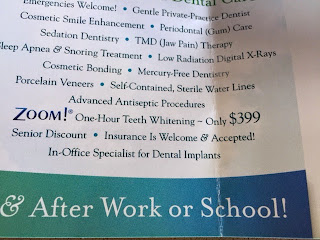 I received this junk mail in my mailbox the other day. It is an ad for a local dentistry office promoting some of its services. As you can see, dentists do a lot more these days besides root canals and teeth cleaning. What caught my eye is the only price listed on the whole sheet--$399 for one hour of teeth whitening. Wow, that seems like a lot of money for one hour of work. My teeth better look like the freaking surface of Hoth after they're done for that price.

Then I got to thinking about how much my services are worth. Do people value anesthesia as much as they do white teeth? To find out, I downloaded Medicare's physician payment worksheet, this one is for 2012. The worksheet has a list of all the procedures that were billed to Medicare and what the program actually paid out to physicians. Private insurance pay more to doctors than the government's Medicare program. However since each insurance company pays each doctor differently depending how their rates are negotiated, looking at Medicare data provides a more uniform look at how much money physicians are getting for performing certain services.

The results are quite sobering. Out of the thousands of payments Medicare made to anesthesiologists that year, only a little over 500 cases received more than $400. You may bill the feds $6,390 for giving anesthesia for a CABG on pump, but they will only reimburse you $376. Think you're going to get $4,384 for anesthesia on a carotid endarterectomy? Think again. Medicare thinks your time and malpractice risks are worth only $371.69. The list goes on and on. Spinal cord surgery? You: $3,498. Medicare: $357.40. Knee Arthroplasty? You: $3,991. Medicare: $349.82.

There are regional differences in how much Medicare compensates. But the prices between what anesthesiologists are asking for and what the program will pay just seem so out of sync that one has to wonder who determines these numbers to begin with? Are they merely pulled out of thin air? Magical thinking on the part of physicians? Perhaps doctors deliberately set their prices into the stratosphere in the hopes that private insurance will actually pay that much money. But how many anesthesiologists will hit the jackpot and actually receive the reimbursement that they asked for, like the $1,320 for a ten minute colonoscopy?

As the country's population continues to get older, more and more patients will be on Medicare. Don't forget the millions of people who are enrolled under Obamacare's expanded Medicaid program, which pays much less than even Medicare. Add in the stagnant physician wages that has been written into law under the AMA sponsored SGR fix, it's easy to see why doctors are pessimistic about the future of medicine in the U.S. Is it any wonder that the U.S. News and World Report recently ranked dentistry as the best health care job in the country over nurses and physicians? When people are willing to pay $399 out of their own pockets for white teeth but quibble over a $20 copay for life saving medicines, than you know it is time to get out of Dodge.
Posted by ZMD at 6:00 AM