How Hard Is It To Match Into Anesthesiology? The Surprising Answer.

FiveThirtyEight has a very informative article about how the whole Match process came about. It gives an historical perspective of the horrors experienced by medical students and hospital residency programs prior to the institution of the Match. Some students would take the first offer that was proposed, whether they really wanted to go there or not, in fear of not receiving a residency position later on. Others would drop their commitment to a program when a better offer came around, leaving programs in a lurch. The Match has done a pretty good job of bringing order to this chaos.

The history of the Match started with algorithms developed using game theory. That's right, the future doctors of America have their whole professional lives dependent on how games are played. Developed by American mathematicians Lloyd Shapley and David Gale, the algorithms were first used to describe how to match up men and women for marriage. Since then, the program has been able to successfully match nearly 95% of medical students with a residency spot, with nearly 80% able to get one of their top three choices.

Now ideally every single student would be able to receive the residency of his or her choice. But of course it doesn't happen that way. Some residencies are much more competitive than others, resulting in a low match number for students. Meanwhile the less popular specialties go begging for applicants. They have no choice but to accept nearly everybody who shows even a hint of interest in going there. Therefore students who wanted to go into the undesirable programs were almost guaranteed to get in. The National Residency Matching Program has produced a tidy little graph detailing how competitive each specialty has in attracting medical students. 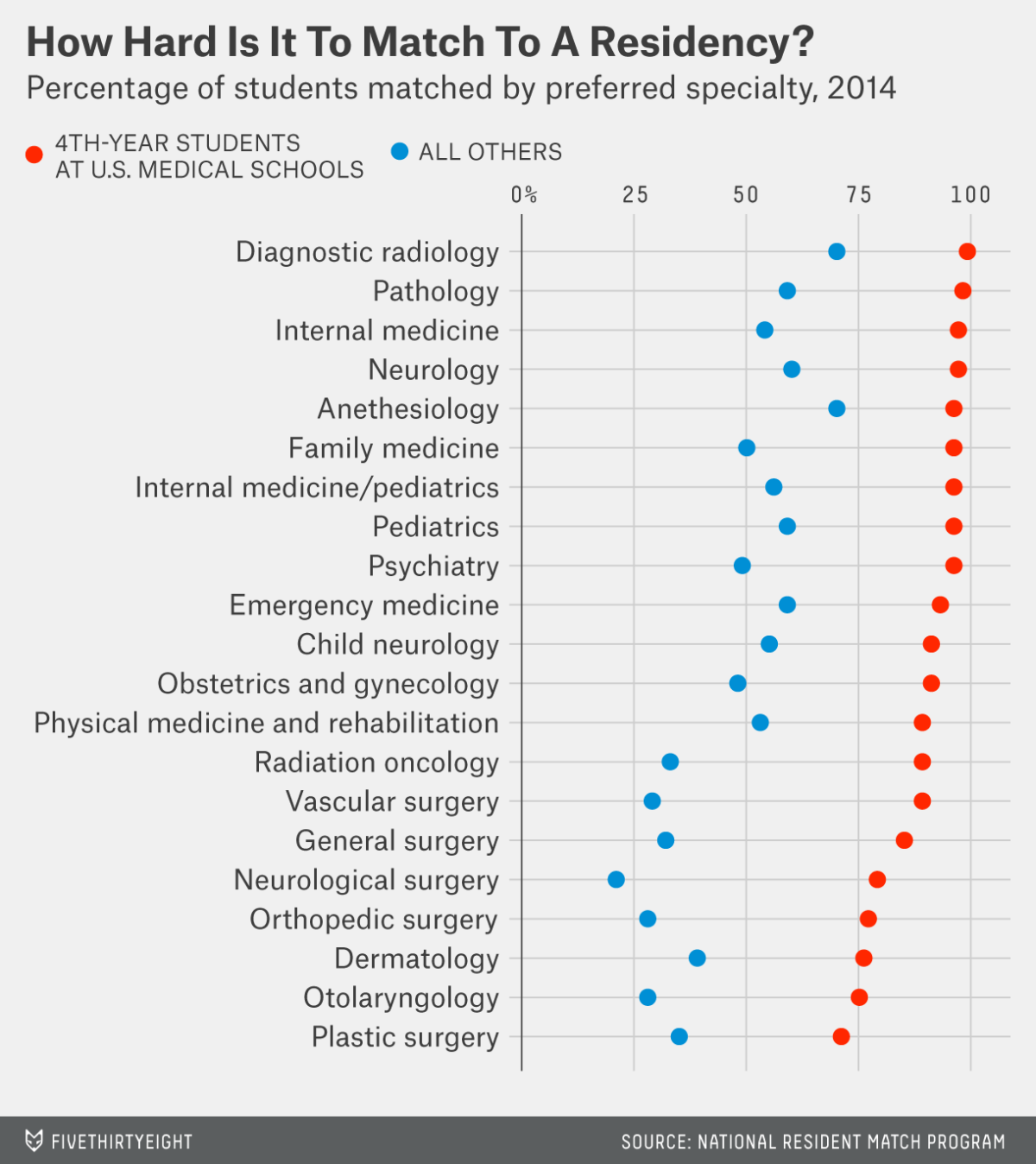 Last year, the NRMP showed that Plastic Surgery and ENT were some of the hardest fields to enter. Only about three-fourths of 4th year US medical students successfully matched into those programs. The numbers were even more abysmal for other students, like foreign medical graduates. They were able to get into those spots less than half the time.

By contrast, the least competitive programs had match rates of nearly 100%. For 2014, the surprising wallflower was Diagnostic Radiology. It was nearly impossible for future radiologists to not get into a radiology training program last year. Even FMG's had almost a 75% likelihood of matching into radiology.

While predictably Pathology and Internal Medicine were shunned by many medical students, look who rounded out the top five in the most unwanted residencies--Anesthesiology. It was actually easier to match into anesthesia than, horrors!, Family Medicine. This was especially true for FMG's, who had about a 75% chance of getting into anesthesia compared to 50% for Family Medicine.

Of course this shouldn't come as a surprise to anybody who's been paying attention. Demand for anesthesiologists have been falling for some time now. The number of practicing anesthesiologists have increased at twice the rate of the general population growth for the last decade. Meanwhile the anesthesia residency program directors keep cranking out more new graduates every year. According to the NRMP, the number of PGY-1 spots in Anesthesiology has increased from 797 in 2010 to 1,049 last year.

The writing may be on the wall for the future of anesthesiologists. It is rapidly becoming a saturated medical specialty with too many providers scrambling for too few good jobs. Factor in the competition from non physicians, the anesthesia job market is on the verge of crashing under its own weight. Good luck to all the medical students on Match Day who want to go into Anesthesiology.
Posted by ZMD at 2:45 PM