Did you know that anesthesia is a growing market? The field currently has about $12 billion dollars in sales. It is projected to grow at a 9.5% annual rate over the next several years, reaching sales of $19.6 billion dollars by 2018. That rate of expansion puts such venerable growth companies like Coca Cola (6.22%) and Proctor & Gamble (8.05%) to shame.

What's driving this enviable growth? Demographics plays a part. As the U.S. population ages, people will need more operations for their various ailments such as cataract and orthopedic surgeries. But another major contribution is the much derided Obamacare. When millions of people gain health insurance, they are suddenly able to afford the procedures they have been putting off, like screening colonoscopies and hernia operations. So more anesthesia providers will be needed to perform these operations.

Herein lies the opportunities that have been keeping major bankers and private equity firms busy. Anesthesia in the U.S. is very fragmented. There are hundreds of different anesthesia groups practicing all over the country. However, they are slowly and inexorably being subsumed into large geographically diverse anesthesia groups in order to compete more effectively against the equally gigantic hospital and insurance companies.

This has led groups like Goldman Sachs (Resolute Anesthesia) and Moelis Capital Partners (North American Partners in Anesthesia) into buying anesthesia practices all over the country. There have been nearly one hundred acquisitions in the last five years worth billions of dollars as these investor spy an enormous opportunity to make money thanks to demographics and healthcare laws.

What do the doctors who sell their practices to these investors get out of the deal? For one, they will finally get a steady paycheck. Their incomes will no longer be at the mercy of stingy insurance companies, underpaying government entities, and unreliable patients. Somebody else will should all the risks of poor reimbursements. The doctors also won't have to deal with the headaches of byzantine government regulations and the escalating costs of maintaining a modern medical office. All the expenses of running a medical group will be borne by somebody else.

But passing the buck to a new employer carries its own costs. By selling out to large corporations, the anesthesiologists trade a higher but unpredictable income for a smaller but steadier salary with hopefully more benefits than what a small anesthesia group can afford. The buyout firms hope to make a profit by having a better position to negotiate favorable reimbursements with hospitals and insurance companies.

So for all you medical students who hope to one day have your own independent practice without anybody looking over your shoulder, I'm afraid it may already be too late. Your medical degree will only entitle you to join one of the thousands of physician minions in the country who toil for millionaire bankers, the true 1% of the nation. 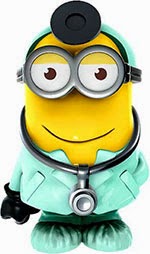