The Focus On Patient Safety Pays Off For Anesthesiologists 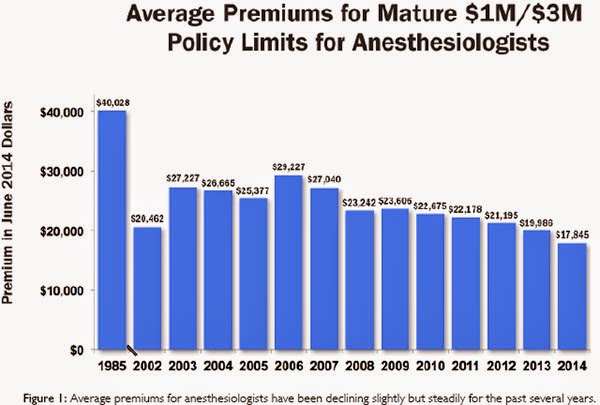 As you can see from the chart, the numbers continue to fall, following the same trend from the past several years. These premiums are for $1 million/$3 million policies. In other words, $1 million payout per claim and up to 3 claims per year. The 2014 average premium is only $17,845 compared to $26,665 ten years ago. These numbers are dwarfed by the confiscatory premium rate of $40,028 thirty years ago, when the specialty was in the midst of a malpractice insurance crisis.

These numbers are just averages. They vary significantly by geographic location, rural/urban divide, and age of the physician. Anesthesiologists who practice in Florida, Illinois, and Washington, D.C. pay the most, averaging over $30,000 per year. Midwestern anesthesiologists in states like Iowa, Minnesota, Nebraska, and Wisconsin pay the least, with average premiums of less than $10,000. That's just another reason why anesthesiologists should move away from the blue coastal states to the more physician friendly Midwest.

If you're a pain management doctor, the news isn't as good. The average premium for pain doctors is $20,130. However that is still down about eight percent compared to last year. Pain physicians have consistently paid about ten percent more than regular anesthesiologists through the years.

Why are anesthesiologists' malpractice premiums falling? My guess is that our specialty's strong emphasis on patient safety has decreased the likelihood that patients will find fault with our work as the basis for a lawsuit. This is unlike the call for expediency and profits practiced in other fields like gastroenterology. The GI docs are paying the price for being so rapacious. Their average malpractice premiums have actually gone up, rising from $17,900 in 2011 to $20,000 in 2012. If I were a GI physician, I would seriously question my society's constant downplay of the role anesthesiologists can play in allowing them to perform a safe endoscopy on their patients. Looks like the insurance numbers are not in their favor.

So keep up the good work, my fellow anesthesiologists. Though patients may not fully comprehend the magnitude of our involvement in guiding them through a safe operation, the green eyeshaded accountants at the nation's malpractice insurance companies do.
Posted by ZMD at 3:23 PM