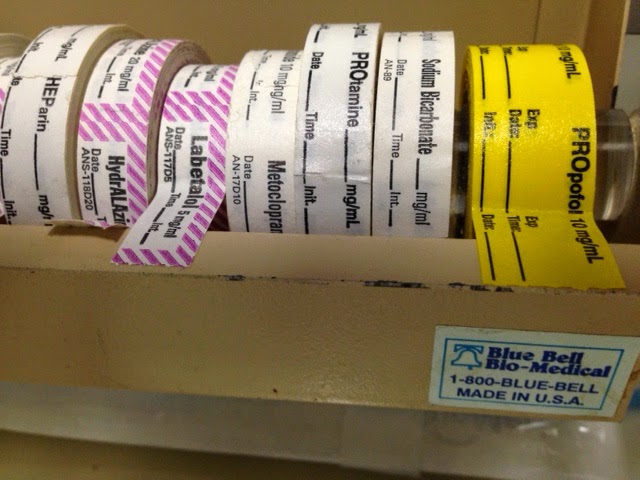 We are expecting shortly another facility inspection by The Joint Commission. Cue scary Psycho music. As per routine, our department heads are going around the operating rooms to make surprise inspections in each anesthesiologist's cart. At the top of the list is making sure that we have properly labeled our drug syringes.

But this year the rules have changed, specifically for propofol. In the past, one would slap a propofol label onto the syringe and write down the date and time the drug was drawn up along with the user's initial. Now that is no longer the case. Instead, the new rules want the date it was drawn up, the time twelve hours later when it supposedly will expire, along with the date of the expiration time and the user's initial. Consequently, in order to have space for all that information, our propofol labels has gone double wide compared to the other drug labels.

I asked my department why twelve hours when I've always been told that propofol should not be used six hours after it is taken out of the bottle. Their reply is that due to the ongoing propofol shortage, our pharmacy has determined that propofol is acceptable to use for up to twelve hours. What? With just a simple decree by committee, longstanding rules for drug use can be changed without further research and FDA approval? It makes me wonder how many other "rules" in medicine are not based on any scientific processes and were developed by a bunch of people sitting around a conference table.

Frankly this whole syringe labeling exercise is a total waste of time. Half my routine during morning setup involves sticking these small labels on small syringes and writing in teeny tiny letters on slippery rounded surfaces. It's not as easy as it sounds. Not all pens will write on these paper labels. And how many of us routinely write on a non-flat surface? The lettering wind up being so small and distorted that they are hardly legible. How is this helping patient safety? Doing this on dozens of small syringes a day wastes a good portion of my time before each case.

I never understood why we even label syringes. I have a colleague at an ambulatory surgery center who claims he has not labeled a syringe in a decade. He uses only four different drugs for all his cases. With a clever combination of different size syringes and needles, he knows exactly what each syringe holds without even thinking about it. He scoffs at our insane rules for syringe identification.

Besides, who really needs to know the content of a syringe? Yes almost all drugs look like water in the syringe so it's helpful to know what's in it. But as far as dating and timing the drug, who really needs that. If I find a filled syringe sitting around that I didn't make, of course I wouldn't want to use it. It would go instantly into the drug trash bin. If I drew up the drug and forgot to put a label on it and subsequently forgot what I put into the syringe, again it goes straight to the medication trash. If I'm the one using the syringe, why should I put my own initials and date and time for when it was first made? I know all that information already. Who are the labels really supposed to help?

But The Joint Commission is on its way. And since they have a near monopoly on this whole hospital accreditation scam and could potentially shut us down, we just have to grit our teeth and follow their rules, no matter how nonsensical they are.
Posted by ZMD at 6:00 AM