Treat Your PONV Patients To A Propofol Sandwich 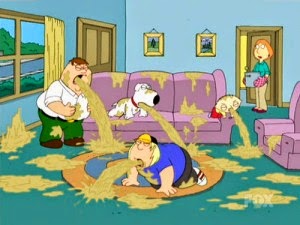 As any anesthesiologist knows, few things are more uncomfortable for a patient or time consuming for the anesthesiologist as dealing with post operative nausea and vomiting. The surgery and anesthetic may be a complete success but if the patient is puking her guts out in recovery, the goodwill that should have been earned gets flushed into the emesis bag. There are literally dozens of ways that have been attempted to eliminate or at least ameliorate PONV, which only goes to demonstrate how pervasive this problem is. I've been trying a technique called the propofol sandwich that has given me good success.

The propofol sandwich certainly wasn't invented by me. It has been extensively written about and researched. However, I was never taught this in my residency and only first read of its efficacy in a California Society of Anesthesiologists newsletter last year. Written by Orange County anesthesiologist Michael Reines, MD, he describes his technique, which he calls bookending, of finishing his cases by turning off all inhalational agents in the last 15-20 minutes of surgery and substituting small boluses of propofol to maintain amnesia. His goal is to use about the same amount of propofol at the end of the case as was used during induction and to have zero levels of volatile anesthetics in the patient's system by the time she wakes up.

Intrigued, I decided to try this for myself these last few months. This works best for predictable cases like appendectomies or lap choles where if you know the surgeon it is easy to guess how long it will take before the case concludes. It doesn't work quite as well in cases that can finish quickly and unexpectedly like ENT procedures. Unlike Dr. Reines, I use a propofol drip to maintain the sedation instead of giving small boluses. Giving small discreet aliquots of propofol at the end has demonstrated blood levels of the drug that is subtherapeutic and isn't adequate to prevent nausea. Running at a rate of about 100 mcg/kg/min, I can maintain good sedation during the last 20 minutes of surgery while allowing the gases to fall to zero before the patient emerges from anesthesia. The key is having as little volatile agents as possible in the patient by the time she awakens.

Why not just go with a total IV anesthetic using propofol for the entire case? Doing so runs the risk that the patient will take a long time to emerge from the anesthetic. Thanks to their insolubility, gases like desflurane and sevoflurane are expelled very quickly by the body whereas propofol can sometimes take longer than anticipated to metabolize, especially in the elderly or obese. By using a small infusion rate at the end of the case, there is less risk of the propofol accumulating in the patient causing a prolonged emergence. It is also less expensive to give a propofol sandwich than to administer TIVA.

How do I know that the patient isn't aware during the operation running on such a low dose of propofol? Anybody who has ever given sedation in the ICU knows that it doesn't take much propofol to provide amnesia. Also in MAC cases like GI endoscopies, experience has shown that very small amounts of propofol is all that's needed to maintain good amnesia. If you're truly concerned about possible surgical recall, you can first try the propofol sandwich by using a BIS monitor to give yourself some piece of mind. Just remember to keep the patient lightly paralyzed up until the end of the case or the BIS readings will jump with the patient's muscle movements.

With the propofol sandwich, I've found that my patients wake up much more quickly and smoothly than with trying to breathe off the inhalational gases. The patients also don't need as much paralytics to maintain muscle relaxation with propofol. Thus I can reverse the paralysis very readily. And my patients in general seem to have less complaints of PONV. Those who have a history of PONV say they still have some nausea but is less severe than with previous operations.

So try the propofol sandwich on your PONV prone patients. You might be pleasantly surprised by how rapidly they emerge with very little nausea. Then you'll get all the kudos from the patient, her family, and the surgeon for being such a terrific anesthesiologist. You have nothing to lose except your patient's emesis basins. You also might want to pass along where you got your new insight on treating PONV.
Posted by ZMD at 12:54 AM

Email ThisBlogThis!Share to TwitterShare to FacebookShare to Pinterest
Labels: PONV