Gorilla In The Midst 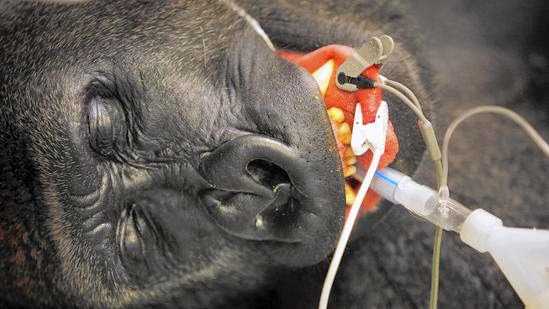 You think you have a difficult patient in preop? Check out this article in the LA Times about treating an uncooperative gorilla at the LA Zoo. Jabari, a 16 year old, 360 pound gorilla at the zoo contracted valley fever, an infection of the lungs by coccidiomycosis. Even though he was severely ill and lost twenty percent of his body weight, he refused to take any oral medications, no matter how craftily his handlers hid the drugs in his food.

They finally realized that Jabari can only be treated successfully with IV antifungal agents. Since gorillas don't sit cooperatively for IV treatments, the only alternative was to sedate him under general anesthesia 25 times in 2 months. Finally he started recovering from his infection and now only needs to take an oral drug that is mixed with his grape juice at a cost of $17,000 per month.

The tricky part, of course, is how do you wake up a sleeping gorilla if you're the veterinarian in charge of sedation. Very carefully, of course. There's a nice little blurb at the end that describes how everybody except the doctor is ushered quickly out of the exam room at the end of the procedure. The veterinarian stays and monitors the patient until there is the faintest signs of emergence such as finger twitching. The endotracheal tube is then quickly pulled and she too hurries out before the gorilla regains full consciousness. Somehow makes my days sound unexciting and mundane by comparison.
Posted by ZMD at 12:01 AM