The Sweatshop In The Radiology Department 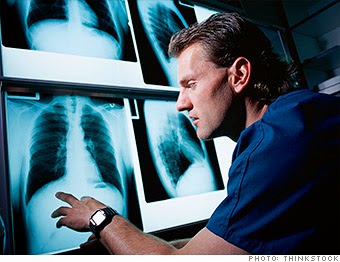 I was talking to a good buddy of mine who is a radiologist at another hospital. To put it mildly, he was really bummed out. The radiologists in his group are all employees of the hospital. It seems the hospital has been telling them they need to crank up their productivity to maintain the hospital's efficiency goals. Otherwise they will not receive any bonuses at the end of the year. All films must have an official reading the day they are taken, even if there is a huge order of MRI's and CT's that got put in late in the afternoon. To save money, the hospital got rid of the transcriptionists so the doctors have to type in their reports themselves. This has been an enormous inconvenience for some of the older radiologists who can't type well. With all the work, my friend says he barely has time to grab a sandwich for lunch before heading back to his office to read more films.

I told him that my impression of radiologists was a bunch of guys who sit together in the darkroom joking around and drinking coffee while they leisurely review images on the lightbox. He said that may have been true a couple of decades ago but not now. He sits alone in his office all day in front of the computer monitor with hardly any interaction with his colleagues. If he had an MI in the office, nobody would notice until the cleaning crew comes in that night. He hasn't seen some of his fellow radiologists in months. Everybody is so busy that people are scheduling more sick time just so they can get a mental break from their work.

This certainly wasn't the future of radiology that I envisioned when I was in medical school. If it wasn't for the fact that I found radiology deadly dull as a medical student, I would have gone into this field. Being one of the ROAD specialties, it still carries great appeal with students who want to practice medicine with a perceived better lifestyle. In the latest Medscape Physician Compensation report, radiologists came in as the fifth highest paid specialty with an average salary of $340,000, ranking just above anesthesiologists.

But radiologists face unique challenges that don't afflict other doctors. The digitalization of radiographic images has made the job extremely portable. Teleradiology makes it easy for hospitals to outsource the job across town or across the country if a group is unable or unwilling to take on the responsibilities that is expected of them. The commoditization of radiology has made it possible for some hospitals to drop their radiology programs completely.

As reimbursements for all physicians fall, radiologists are supposed to compensate by increasing the pace of their readings. Unlike anesthesiologists who really can't work faster than the pace of the slowest surgeon, radiologists are expected to read a few more films each day to justify their income. Medscape's survey shows that radiology is one of the few specialties whose salaries actually dropped last year, by 2%.

I felt bad for my friend. I remember how excited he was when he matched into a radiology residency. I felt a twinge of envy at that time too. Who wouldn't want to sit around, talk to good friends, and look at pictures all day while getting paid extremely well for it? Now every time I talk to him, he sounds more depressed as he complains about his job. I told him he needs to take some time off so he could feel rejuvenated. He said he would, as soon as the twenty other guys ahead of him get their sick leaves first.
Posted by ZMD at 11:50 PM

Email ThisBlogThis!Share to TwitterShare to FacebookShare to Pinterest
Labels: ROAD