The Insidiously Steady Income Of Doctors

Many people are attracted by the perceived stability of doctors' incomes. Year in and year out people get sick so doctors will always have jobs, right? By contrast lawyers are beset by an oversupply due to law school greed and technology advancement. Wall Street bankers can suffer a massive hemorrhage of jobs during bear markets in stocks. But parents encourage their kids to become doctors so that they will have peace of mind and not worry that their offsprings will want their old bedrooms back after graduation.

But is the stable income of physicians illusory? What if people really understood the truth about how poorly physicians have been doing? As the just released Medscape physician compensation report showed, anesthesiologists' incomes were unchanged last year from the year before. If you look through the entire report, you'll see that almost all physicians showed little growth in their earnings last year save for a few primary care fields that had single digit increases due to raises in reimbursements specified by Obamacare.

In the meantime, doctors will just have to satisfy themselves with another 0.5% increase in Medicare reimbursements that was voted by Congress as part of another temporary doc fix before a permanent solution to the SGR problem can be found. However, the SGR patch is good for twelve months while the Medicare raise is only good until the end of the year. Therefore during the first four months of next year, doctors will once again have zero chance of getting more money from the government.

While a 0.5% increase may sound better than nothing, it is in fact not an increase at all, but a step backwards. The U.S. Federal Reserve has set a target of two percent as the goal for consumer inflation. Therefore a 0.5% increase is actually a 1.5% decrease in inflation adjusted wages. As a report in JAMA pointed out, between 1996 and 2006 physician income remained stable nominally, but actually fell 25% after adjusting for inflation. At the same time, our own government is predicting that medical inflation will increase at an annual rate of 5.8% for the next ten years. 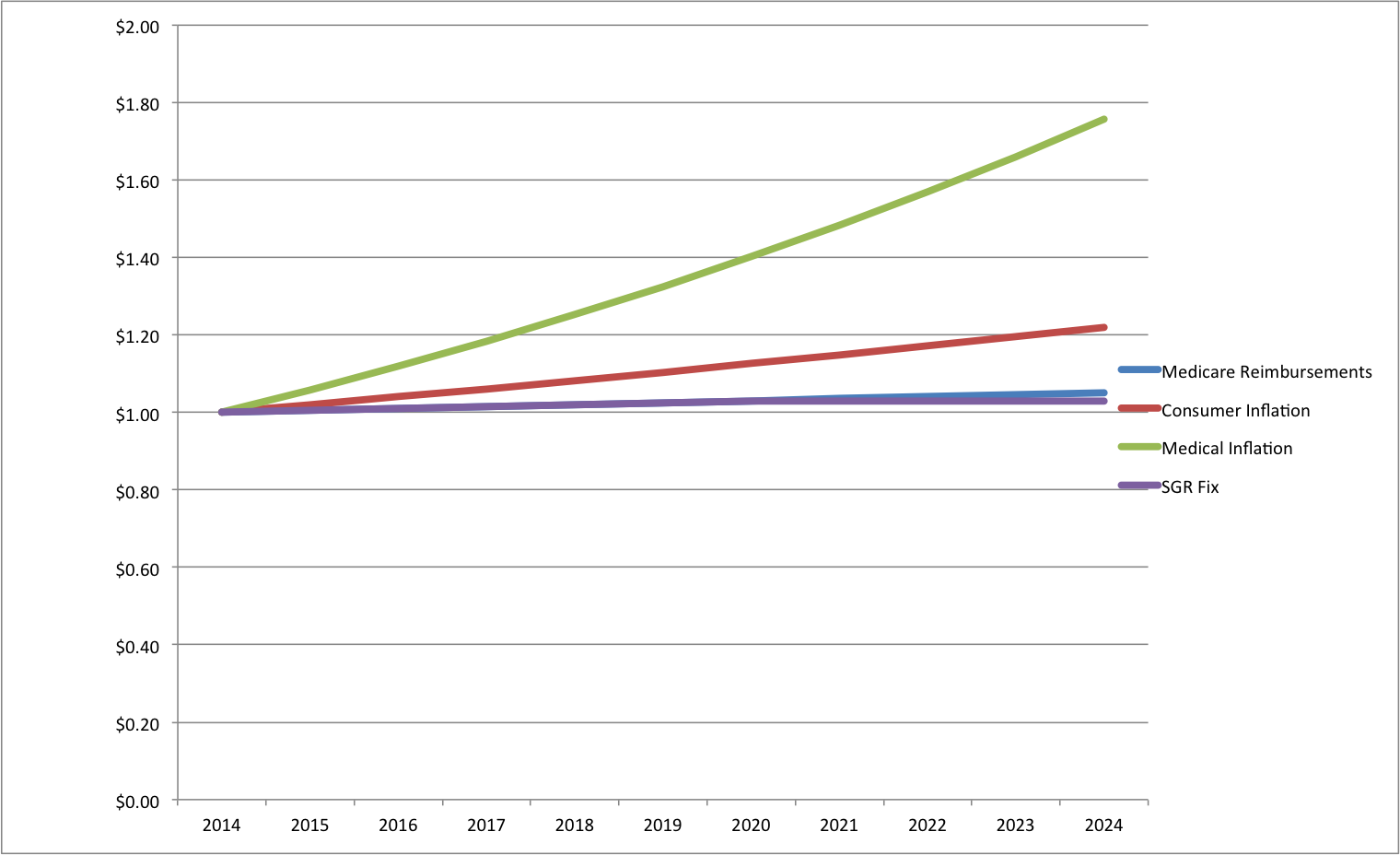 So how do these number affect doctors? Here is a graph showing price increases for ten years starting from a base of $1.00 today. Medical inflation increasing each year at 5.8% for a decade clearly demonstrates prices zooming up and away. In ten years, you'll need $1.76 for the same $1.00 purchase today. Consumer inflation at 2% shows a more modest growth, with a price reaching up to $1.22 after a decade. Doctors incomes, if we continue to get an annual 0.5% raise in Medicare reimbursements, will only reach $1.05 in ten years. If the SGR fix that barely failed in Congress had been implemented, it would have called for an increase of 0.5% per year for only the first five years followed by a pay freeze for the next five. Doctors in that scenario would receive $1.03 for what is worth $1.00 today. Therefore after ten years, a doctor's income would fall by twenty percent when compared to consumer inflation and nearly half when up against medical inflation.

And everybody knows that the consumer price index as measured by the government is artificially kept low because they take out two of the basic necessities of life: food and fuel. Gasoline prices ten years ago in California were barely above $2 per gallon. Today it is over $4. It is not unreasonable to expect prices to double again in ten years to $8 per gallon, especially as the environmental lobbyists continue to flex their substantial muscles in the California legislature to prevent any further drilling for oil.

Other basics of daily life, including utilities and insurance, are unlikely to rise only two percent per year. Office employees are also probably not going to accept such small annual raises. When Social Security raised its cost of living adjustments by 1.5% this year, howls of protest could be heard emanating from nursing homes across the country. Thus one will be unlikely to find good employees without raises that at least keeps up with inflation, even if the physician/owner does not get any himself.

So one can judge for himself whether having a "stable" income is really such a good thing. Sure the number look impressive. But those same numbers two to three decades ago permitted doctors to buy medical office buildings and rental properties in Beverly Hills. Today's doctors can barely afford a single family home on the Westside of Los Angeles. In another twenty years, perhaps they will have to give subsidized housing to physicians so that they can afford to live close to their hospitals for emergency cases. That's what all this nickel and diming in Congress has done to the downtrodden medical profession.
Posted by ZMD at 7:00 AM